The unique collection of footage for the documentary Putin’s Witnesses was long under the careful protection of its creator, the renowned Ukrainian documentary filmmaker Vitaly Mansky. He did not make it available to festival director Karel Och for viewing until they were in the privacy of Mansky’s hotel room in  Berlin. The audience in Karlovy Vary was thus the first to see it on screen.

Mansky got close to the current president of the Russian Federation, Vladimir Putin, chiefly at the time when Putin was the prime minister, during the presidential elections and then during Putin’s first term as head of state. In 2004, the director cut all ties with the government after producing one film about Gorbachev, one about Yeltsin, two about Putin and around 200 films about the Kremlin. He took a large portion of the footage to Latvia, where he moved after the annexation of Crimea in March 2014. “I’d like to revisit the old footage from the early years of Putin’s government and, just like in this documentary, look for symptoms of a disease that I had hoped would have gone away by 2012,” said Mansky after the screening.

The film also enters into the private life of the author’s family. At the onset, we see shots of his wife and two daughters in the evening before the beginning of the new century. During the debate following the film, the director admitted that the documentary is one of his most personal: “I decided to shoot this film because I don’t think that it’s enough to show solidarity: I’m not only a witness, but a participant in events. I think it is a sign of a responsible society to try to cure a disease that can almost result in its death.”

During the discussion, Filip Remunda, the representative of the production company Hypermarket Film, thanked the Czech Television for its openness and the courage with which it supported and protected the documentary. Also taking part in in the debate were representatives of Current Time TV, a station based in Prague and broadcasting in Russian, and probably the only channel that will make it possible for citizens of the Russian Federation to see Putin’s Witnesses. 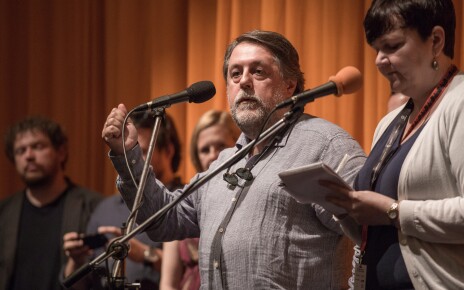