The complete programme of the 55th Karlovy Vary IFF will be published in June, 2020. 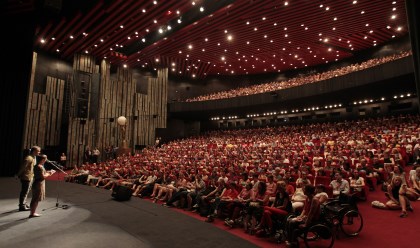 Each year, the Karlovy Vary IFF presents about 200 films from around the world.

In addition to the regular programme sections showcasing works by the world's leading filmmakers and by promising new creative talents, festival visitors can also look forward to watching films as part of retrospectives and specialised sections.

With the exception of retrospectives and the section presenting current Czech films, all films will be shown in the Czech Republic for the first time, and many of them will have their world, international or European premiere in Karlovy Vary.

East of the West Competition
An international competition of first and second feature-length fiction and documentary films from Central and Eastern Europe, the Balkans, the countries of the former Soviet Union, the Middle East and North Africa presented as world, international or European premieres.

Special Screenings
An exclusive selection of international and Czech films presented as premieres and avant-premieres.

Horizons
A selection of the most remarkable contemporary films.

Imagina
Films with an unconventional approach to narration and style; distinctive and radical visions of film language.

Future Frames: Generation NEXT of European Cinema
Ten directors, members of the upcoming generation of young European filmmakers, present their student films. The project is organized in cooperation with European Film Promotion.

Midnight Screenings
A selection of the latest horror and action films, works that look at their genres in new, often humorous, ways.

People Next Door
A thematic section created by the Karlovy Vary IFF in collaboration with the Sirius Foundation, whose programme reflects the ideas underlying the Walking People (Chodící lidé) campaign. The aim of this campaign is to show the general public how to communicate with people with disabilities and how to interact with them.

Out of the Past
Classic, cult, rare and unfairly overlooked films, screened in their original or restored versions.