News Karel Och to introduce A Chiara at the Aero cinema

​On Thursday, 12 May at 8:15 pm, Prague’s Aero Cinema will host the pre-premiere of the Italian film A Chiara, which visitors to last year’s Karlovy Vary festival could see in the Horizons section. The screening at the Aero will be introduced by KVIFF’s artistic director Karel Och and will be followed by an online discussion with director Jonas Carpignano.

Jonas Carpignano is one of Italy’s most talented filmmakers today, and the Karlovy Vary festival regularly shows his films. The director himself came to KVIFF to introduce his first two, but for family reasons he could not accompany his third film, A Chiara, which took the main prize in the Quinzaine des réalisateurs section at Cannes.

When KVIFF’s artistic director Karel Och sent him a photograph of the film’s poster at the festival by the Teplá River, Carpignano immediately sent it to the film’s star Swamy Rotolo. “And she said that she had never seen such a large picture of herself and that she just had to come,” Och revealed at the festival.

Swamy was joined at the festival by her sister Grecia Rotolo, who played Chiara’s older sister in the film. “It’s something of a family picture. My mother plays in it too, my father, my aunt… It takes place in my hometown, so you can see what life there is like. But it’s not our story,” Swamy said.

Fifteen-year-old Chiara has a lot of friends, two sisters, and dedicated, loving parents. Her happy life is turned upside-down by a violent incident and her father’s subsequent disappearance. Slowly, the truth begins to surface – one that her father hid from her and before which the rest of the family closed its eyes. Chiara is confronted with a decision that will determine the future direction of her life. Director Jonas Carpignano empathetically tells the story of a girl forced by circumstance to grow up fast – all of it set against the photogenic backdrop of southern Italy’s Calabria region, where crime and violence are a regular part of life. 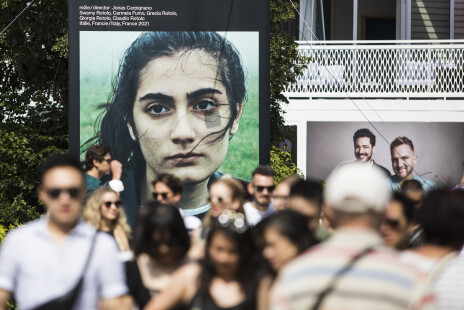