News For the second year in a row, Variations presents outstanding films and concerts

After last year’s successful pilot year, Variations returns to Karlovy Vary this fall with Variations 2022, organized by the Karlovy Vary International Film Festival and the Czech Philharmonic. On 11 and 12 November, Variations offers visitors an outstanding program of concerts and film screenings.

“We are glad that this project, organized as a partnership between two traditional Czech cultural brands – the Karlovy Vary International Film Festival and the Czech Philharmonic – has met with such a positive audience response. I am convinced that the program of outstanding films and concerts put together especially for this year’s Variations will once again be a cultural event for residents of and visitors to Karlovy Vary,” says KVIFF’s president Jiří Bartoška.

“The town of Karlovy Vary possesses immense potential and should absolutely host more events than just the film festival. It is a city made for any type of event. We sensed the opportunity to offer an interesting program outside the traditional festival season,” adds KVIFF’s executive director Kryštof Mucha.

For the cinematic program of this year’s Variations, the programming team of the Karlovy Vary film festival selected three outstanding films, which audiences can see at Saturday’s screenings at Kino Čas. Tickets for all films may be purchased at Kino Čas or at pre-sales outlets.

“One of our favorite festival cinemas hosts a trio of exclusive films that, without reservations, can be considered outstanding audiovisual spectacles featuring unique performances and a strong emotional charge,” says KVIFF’s artistic director Karel Och. “Two are brand-new, while our special screening of Lars von Trier’s Melancholia calls attention to an important cinematic event this fall – revival screenings of nine films by this enfant terrible of Danish and international cinema at Czech theaters and online at KVIFF.TV.”

One of the most distinctive films at this year’s Venice Film Festival, Tár is set in the rarefied world of contemporary classical music and features a masterful performance by lead actress Cate Blanchett. Her Lydia Tár is a renowned and feared celebrity among conductors. The film is a gripping tale of obsession, phenomenal talent, the breathtaking power of music, and power games. (12 November at 7:30pm at Kino Čas)

Director James Gray’s Armageddon Time, a bittersweet drama about coming of age in New York in the 1980s and about the loving, if often intense, bonds of a charmingly distinctive yet traditional Jewish family, was first screened in main competition at this year’s Cannes Film Festival.  The charismatic and thoroughly sympathetic patriarch is energetically portrayed by the legendary Anthony Hopkins, with excellent support from Anne Hathaway and Jeremy Strong, the latter of whom recently gained fame as Kendall in the well-received series Succession. (12 November at 3pm at Kino Čas)

Lars von Trier’s psychological catastrophe film Melancholia is a caustic antithesis to Hollywood blockbusters about the end of the world. Kirsten Dunst’s performance earned her an award at Cannes, where von Trier’s inappropriate remarks at a press conference made him “persona non grata” for the subsequent seven years. The film’s main musical theme is from Richard Wagner’s Tristan und Isolde. (12 November at 11am at Kino Čas)

The Variations program is further enriched by KVIFF.TV, which offers a trio of opera-themed films: Maria by Callas, Marguerite, and Pavarotti. Karel Och says of the selected films: “I was reflecting on the programming decisions, and I am convinced that – unlike Variations, where we can allow for films with just vague, indirect, ties to the event’s musical program, where both disciplines’ cathartic effects arises from emotions – when it comes to the three VOD choices, we must be more explicit and aim straight for the heart.”

“Last year, when we began to plan Variations in collaboration with the Karlovy Vary International Film Festival, we made it our goal to bring the unique atmosphere of Karlovy Vary together with music and film at the highest level and to offer something for everyone interested in music and film,” says David Mareček, general director of the Czech Philharmonic. “The first year exceeded our expectations and was received positively by audiences. We are thus glad to again be able to combine two worlds that, though they differ in form, share a desire to provide a profound and unforgettable experience.”

The peak performance of Variations’ musical program is an evening concert at the Karlovy Vary Municipal Theatre, where the Czech Philharmonic will present Antonín Dvořák’s Concerto for Violin and Orchestra in A Minor, op. 53 and Ludwig van Beethoven’s Symphony no. 7 in A Major, op. 92. Dvořák’s violin concerto demands a virtuoso playing style but is also characterized by a distinctive song-like melody and a rich and elaborate orchestral accompaniment. The inclusion of Ludwig van Beethoven’s (1770–1827) Seventh Symphony in the program was not done by chance. The composer worked on it in 1811 and 1812 during his stay at the spas in Teplice, Karlovy Vary, and Františkovy Lázně. The Czech Republic’s leading orchestra will be directed by one of today’s most renowned international conductors, Domingo Hindoyan. The soloist for the evening is concert master of the Czech Philharmonic Jan Mráček.

For detailed information on the program and ticket sales, visit Variations. 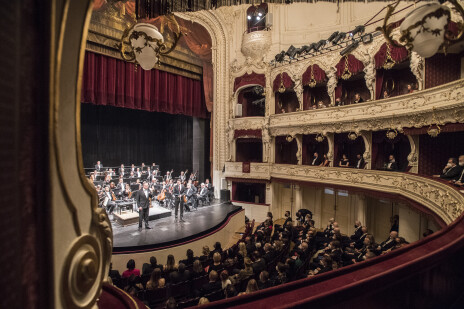