Since the mid-1960s when she graduated from DAMU, Iva Janžurová has been a core figure of two theatres – Vinohrady Theatre and later the National Theatre, of which she is a member to date. In the 60s she also launched her extraordinary film career, during which she played dozens of important roles. She was above all considered an original comic actress, but her wide acting range is attested to by films such as Coach to Vienna, Oil Lamps and Morgiana. Her comedic titles are crowned by Svatba jako řemen, Pension pro svobodné pány and the legendary Men About Town, screened to great audience response at KVIFF 2011.

In the 70s and 80s she drew viewers to titles such as Hodíme se k sobě, miláčku?, Marečku, podejte mi pero and Což takhle dát si špenát. She played many fairytale characters for the television screen and was a standby of many television series. Film only offered her a significant fresh opportunity at the end of the 90s. She earned her first Czech Lion award for the role of an aging bride in the film Co chytneš v žitě, and added another for Alice Nellis's tragicomedy Výlet. She earned an Alfréd Radok Award and a Thalia Award for her theatre roles. 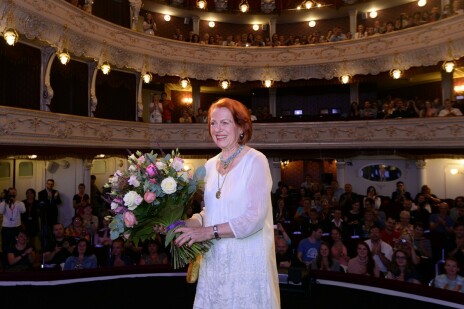