The Karlovy Vary IFF is excited to welcome back Ted Hope, a renowned producer of independent films (e.g. 21 Grams, Happiness, American Splendor, and Storytelling) who is now representing Amazon Studios as Head of Motion Picture Production. Amazon has vigorously entered the film market in recent years with a new strategy for film production and distribution through its video-on-demand platform, while at the same time focusing on theatrical releases of independent art house films. Most recently, Amazon had five of its films selected for the Cannes festival and it continues to develop TV shows and movies via on-line submissions and feedback through crowd-sourcing.

“Ted has already been to the festival twice – once as a member of the Main Jury and once as a producer of a competition film The Collaborator. When we met at Sundance this year, we agreed it would be wonderful to have him at Karlovy Vary as Amazon Studios’ chief producer so that this innovative project can be introduced in the Czech Republic. However, Ted would also like to use the unique opportunity to meet dozens of European distributors,” says the festival’s executive director Krystof Mucha.

In addition, the festival will organize an industry event at which Ted will offer his fresh vision for film in the years to come.

This year marks the 90th anniversary of the birth and the 20th anniversary of the death of Czech screenwriter, producer, director and outstanding film teacher František (Frank) Daniel (1926-1996). At “A Frank Daniel Day” (July 3), this year’s Karlovy Vary International Film Festival will remember one of the most widely respected filmmakers of Czech origin.​

František Daniel significantly influenced modern Czech filmmaking through his work on nearly 40 Czechoslovak films as screenwriter, director, producer and the head of one of the most progressive production groups at Barrandov Studios. His most successful project was the Oscar-winning The Shop on Main Street (1965), on which he worked as a producer – a position he managed to push through despite the communist bureaucracy’s opposition.

Daniel first began teaching in the mid-1950s, and some of his most talented students included Pavel Juráček and Miloš Forman. In 1967–68 he was the dean of FAMU.

In 1969, Daniel emigrated to the United States, where he continued in his teaching activities. He was the first dean of the American Film Institute in Los Angeles, for which he developed an educational programme that was later adopted by many other schools. One of his students at AFI was the young director David Lynch, whom Daniel helped with the realization of his first film, Eraserhead. To this day, Lynch calls Daniel his mentor and the best film teacher in history, someone who had a fundamental influence on his career. After leaving AFI – a departure directly related to his support for Lynch – Daniel taught at Carleton College in Minnesota and at Columbia University in New York. In 1981, Robert Redford offered Daniel the position of artistic director for his new Sundance Institute. Daniel also helped to establish the screenwriting department at the University of Southern California and acted as a consultant for the Rockefeller Foundation and person consultant for David Rockefeller.

The Karlovy Vary festival will honour the extraordinary figure of František Daniel with an art workshop where his teaching methods will be presented by analysing the film Some Like It Hot.

The festival will also be showing Letos v září (1963), which he co-wrote and directed while still in Czechoslovakia. The screening will be preceded by an introductory talk. Guests include Daniel’s long-time friend, the director Ivan Passer, his sons Martin (who is also a film teacher) and Michal (a photographer), and Ted Braun. 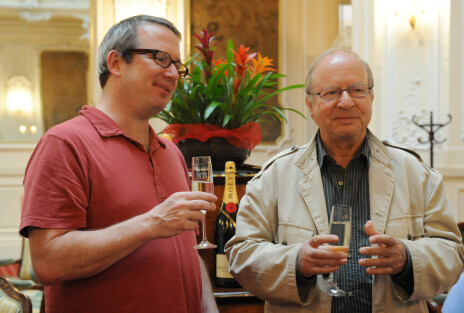