The international premiere of the Hungarian film Kills on Wheels inaugurated the East of the West section this evening in the Karlovy Vary Municipal Theatre, to an ovation from the audience.

This year the East of the West section presents twelve films, ten of which are debuts. The director, Atilla Till, is one of the two authors with some previous experience. After Panic (2008) and Beast, which premiered at the Cannes Film Festival in 2011 and continued on to several other international festivals, this year Till brings us the action-packed comedy Kills on Wheels, inspired by his own experience of volunteer work with disabled people.

The film was introduced today by a large delegation that included the lead star, Zoltán Fenyvesi. What the audience most appreciated about the film (which is also part of the People Next Door section) was its grim humour. It's not afraid to call a spade a spade, but still offers the audience some insight into the lives of the heroes who live on the fringes of society and yearn for things that "normal" people take for granted. 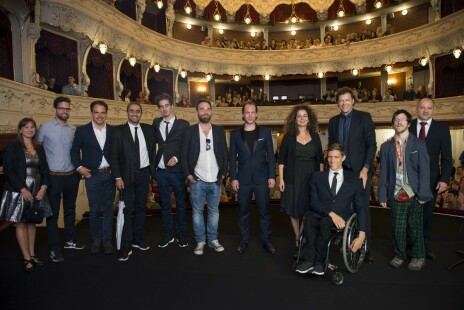