The 8 projects (plus 1 out of competition) selected out of 57 registered projects from Central and Eastern Europe, the Balkans, Turkey, Greece and post-Soviet territories were presented at Works in Progress Award @KVIFF. The 2016 award, in a total value of 100.000 EUR, is combining post-production services in UPP and Soundsquare, and a cash award by Barrandov Studio (10,000 EUR). The winner is Requiem for Mrs. J (Rekvijem za gospođu J, dir. Bojan Vuletić, Serbia, Bulgaria, Macedonia).

“We decided to award a drama that looks at today's society from a darkly humorous and realistic perspective. Lead by a complex performance, this film examines the life of a woman whose struggle with bureaucracy forces her to take an inevitable solution, the Works in Progress Award goes to Requiem for Mrs. J,” thought the jury consisting of Karin Schockweiler (The Film Fund of the Grand-Duchy of Luxembourg), Kim Yutani (Sundance IFF) and Meinolf Zurhorst (Arte/ZDF).

Eurimages Lab Project Award @KVIFF was awarded to Perseverance (Vztrajanje, dir. Miha Knific, Slovenia, Croatia, Italy, Serbia). “We were moved by this poetic film that evokes the basic conditions of mankind. For its visually striking and sensory journey through the secrets, memories, and imagination of the human race, the Eurimages Lab Project Award @ KVIFF goes to Perseverance,” said the jury.

Eight projects selected out of 64 registered projects from Eurimages countries in production or post-production, made outside the traditional filmmaking framework and showing international co-operation. The best project will receive an award of EUR 50,000. Of the four international film festivals selected by Eurimages from different corners of Europe, KVIFF is the first to present this award; over the coming months, the others will present the same award at their respective festivals. 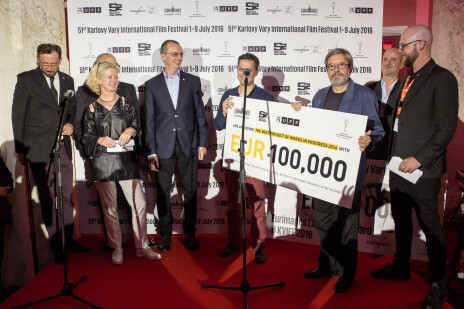