The Hungarian feature film It's Not the Time of My Life, shot by the director Szabolcs Hajdu in his own home with the members of his own family and his friends, was awarded the Crystal Globe for the Best Feature Film and the prize of USD 25 thousand at the 51st Karlovy Vary International Film Festival. Hajdu also received the Best Actor Award for his family drama.

The Special Jury Prize was granted to an unusual romance Zoology by Russian director Ivan Tverdovskiy, about a woman who has grown a tail. Slovenian director Damjan Kozole received the Best Director Award at the honorary ceremony for his drama about fear Nightlife. Both the Czech co-production feature films included in the Competition succeeded, too. Zuzana Mauréry received the Best Actress Award for the film The Teacher by Jan Hřebejk and the last feature film by the late Jan Němec, The Wolf from Royal Vineyard Street, received a Special Mention; another Special Mention was granted to Romanian-Swedish drama By the Rails.

The prize for the best film of the East of the West Competition was awarded to a quasi-autobiographical debut by a Georgian director Rusudan Glurjidze House of Others. The Special Jury Prize was granted to Estonian feature film The Days That Confused by Triin Ruumet.

The Grand Prix for Best Documentary Film went to an American essay about love LoveTrue by the director Alma Har'el. A Special Mention was awarded to the document Ama-San by Portuguese filmmaker Cláudia Varejão, about Japanese traditional pearl hunters. The American movie Captain Fantastic received the Právo Audience Award and will be screened in the Czech Republic from the next week, also thanks to the KVIFF.

Czech actress Jiřina Bohdalová and American screenwriter and director Charlie Kaufman were awarded with The Festival President’s Award at the closing ceremony. She thanked the Festival President, Jiří Bartoška, as well as the directors “who were brave enough to cast me in unexpected parts”. The Festival President’s Award was also granted to American screenwriter and director, and Academy Award winner, Charlie Kaufman. He thanked in Czech: “Dobrý večer, ahoj.  Je to pro mě velká čest, dostat tuto cenu a být na tomto festivalu. Doufám, že mi rozumíte. Děkuji vám. Čau (“Good evening, Hallo. I am very honoured to have been granted this Award and participated at this Festival. I hope you understand me. Thank you. Bye”). 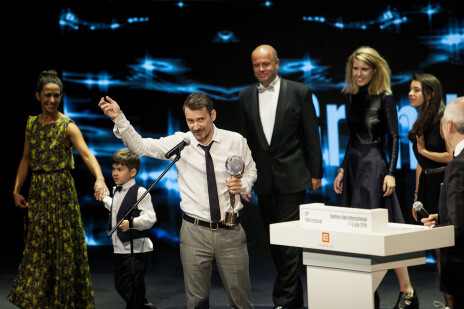