The 52nd Karlovy Vary International Film Festival will continue a successful tradition with the world premiere screening of the digitally-restored, Oscar-honored movie The Shop on Main Street from creative pair Ján Kadár and Elmar Klos.​

The digitalized print of the film came about in cooperation with the Czech Film Foundation and the State Film Fund. Main Street represents the fifth movie to be digitally restored through the initiative and financing of the Czech Film Foundation; the other titles are The Firemen’s Ball, All My Good Countrymen, Closely Watched Trains, and last year’s Intimate Lighting.

The Shop on Main Street was made in the most prolific and successful period of Czech cinema, known as the New Wave. The filmmakers were, however, an already philosophically and cinematically seasoned directing duo for whom Main Street represented their seventh and penultimate project. For three years they worked on the script, based on a story by Ladislav Grosman, while concurrently making Death Is Called Engelchen (1963) and Accused (1964), which form a loose trilogy with 1965’s Main Street. The plot unfolds in a small town in eastern Slovakia during World War II when a local bigwig in the Slovak People’s Party arranges an Aryanization order for the shop of a Jewish widow named Mrs. Lautmannová. Good-natured Tono Brtko protects the old woman from reality by opting not to acquaint her with the actual political state of affairs, but, at the same time, he is unable to openly attempt to save her. Kadár and Klos created a powerful, timeless story: an evaluation of the courage within us and the need to face down evil in any form. “The foundation of all violence is always made up of good, harmless people who passively accept it,” said Ján Kadár in characterizing the story’s central thrust, to which Elmar Klos added: “It’s highly reductive to depict violence solely as the devil. It can as well be convivial, caring, neighborly – and all the while evil nonetheless.”

The Shop on Main Street took the Academy Award for Best Foreign Language Film in 1966. Its success opened up other possibilities but only for a short time. Ján Kadár emigrated after 1968, and Elmar Klos became the victim of Normalization purges in the former Czechoslovakia. Elmar Klos died in 1993 at the age of 83, surviving his friend and creative partner by 14 years.

The gala premiere of the digitally-restored print of The Shop on Main Street will take place on July 1, 2017 in the Grand Hall, Hotel Thermal.

In conjunction with the digital restoration of The Shop on Main Street, the Czech Film Foundation has launched the fund-raising campaign #vydotitulku. As with the previously restored films Intimate Lighting and The Fabulous Baron Munchausen, donors may have their names permanently attached to the digitally-restored version of this legendary, Oscar-winning movie.

In order for a donor’s name or logo to appear in the film’s closing credits, just send a minimum contribution of 10,000 Czech crowns for the digital restoration of The Shop on Main Street by the end of May 2017 to transparent account 107-5653070287/0100

You may also contribute via text message for 30 Czech crowns: text the phrase DMS BIJAKY 30 to telephone number 87 777. Find out more about this digital restoration and other Czech Film Foundation projects at www.bijaky.cz. 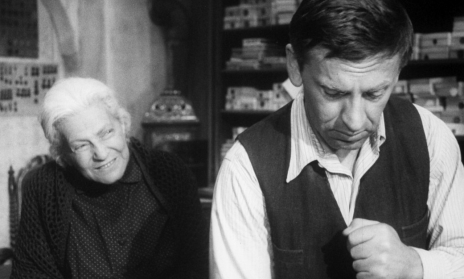