A poem by Jaroslav Vrchlický inspired Václav Kadrnka's new film Little Crusader, which has become the Czech entrant at this year's KVIFF main competition. Yet the poem about a father searching for his young son against the backdrop of the Children's Crusade is not well known. "I discovered it while doing research for my next film. He wrote it at the end of his life, in a crisis, and it only came out once. It's theme is fatherhood – a journey after a lost son who the father cannot catch up to," explains Kadrnka.

The filmmaker, known for his acclaimed debut Eight Letters, decided to retell Vrchlický's work almost without words, primarily making use of cinematic images. "The poem is long, written in free verse using rich language. We had to distil down its meaning," says Kadrnka, adding that only those who wanted to on the crew read the poem.

The actor in the starring role, Karel Roden, mentioned at a press conference that very few films of this type are made, also stating that he tried to tone down his acting while playing the father. "A few extraneous things on my part may have remained. Actors are used to always be communicating something, but in life a person needn't constantly express something, particularly if they're alone."

The visual concept is inspired more by medieval frescos and buildings than by a specific film prototype and deliberately depicts the Middle Ages with an emphasis on pure white and pastel colours. "We tried out period armour, but on Karel it looked like a sweater. Cinematic naturalism does not necessarily lead to truth," opined the director. 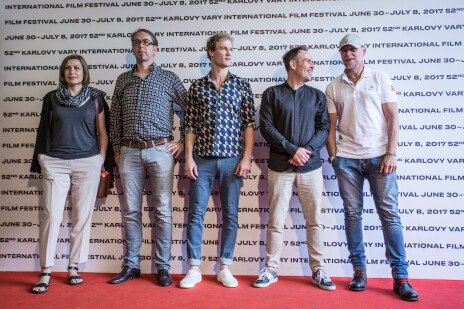