News Lara and the tragedy of a wasted life

The promising German director Jan-Ole Gerster has come to Karlovy Vary following his successful debut Oh Boy to present his second film, entitled Lara. This film, about how we burden our children with our own ambitions and how our unfulfilled dreams destroy our lives, has its world premiere in Karlovy Vary in the Main Competition.

Retired civil servant Lara wakes up to the day when she is to celebrate her sixtieth birthday. A special event awaits her in the evening, a major piano concert by her son, who is presenting his own original music for the first time. Lara however isn't exactly the type to limit herself to the charitable words of support her nervous son so desperately needs. "Lara is about the tragedy of a wasted life, the fear of mediocrity, and the question of whether artistic integrity can sometimes lead to self-denial," says the director Gerster. "All these topics have accompanied me my whole filmmaking life, and despite the customary doubts, I draw motivation and creative energy from them."

The main role is played by German acting legend Corinna Harfouch, known from films such as Downfall, Perfume: The Story of a Murderer, and This Is Love. Older audiences may also remember her as the winner of the acting award from KVIFF 1988. Her Lara is tough, but we feel that inside she is actually quite wounded. In his own words, the director felt a deep connection to this "cold" character immediately upon reading the screenplay. "For me the greatest privilege of being a filmmaker is exploring how people live and what they are like, and at the same time recognizing myself in characters with whom at first glance I have nothing in common," Gerster added. 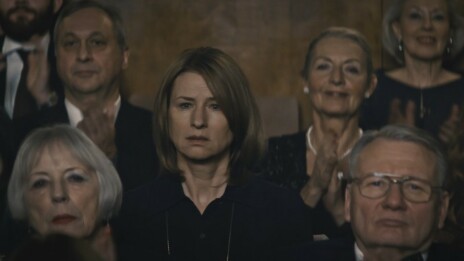