The Karlovy Vary International Film Festival was the venue for the sparkling world première of a documentary about the creative and personal life of a key figure on the Czech cultural scene: Jiří Suchý - Tackling Life with Ease by director Olga Sommerová. This film about an artistic prodigy, who according to Thursday's Festival daily boasts no less than nine talents and professions, won a lengthy standing ovation.

During the screening quite a few members of the audience crooned Suchý's songs, which have been passed down through the generations for several decades now. In the film Suchý radiates positive energy and the spirit of the ever-youthful clown that he is. "Most of all I am grateful to Jiří Suchý himself, with whom I was able to meet during the thirty days of filming. It was a fantastic experience for me. During the filming and editing I also discovered how brilliant Jiří Suchý is," said the documentarist, who has already made films about the likes of Věra Čáslavská and Soňa Červená, in her introduction.

Her new film spans a great many phases of the 87-year-old artist's life: from the Semafor Theatre's beginnings and the Suchý-Šlitr collaboration, to the Velvet Revolution, to snapshots from Jiří Suchý's meeting with Louis Armstrong. Suchý launched 97 plays, wrote the lyrics for 1,400 songs and the music for 500 songs at the Semafor Theatre. "It's hard for me to talk about a film that expounds how frightfully good I am. If Olinka had filmed something about my vices, then this would be easier for me. It's a beautiful film and I've seen it three times, but today is the first time I have watched it with an audience, and I wonder whether they might run me down," Suchý said, making the audience laugh.

The audience in the Karlovy Vary theatre left with more than just the experience of the film; they also took with them some "šlitrovky", sweets that were created in honour of the other half of the Semafor Theatre's creative duo. It is said that Šlitr had always wanted to have a sweet named after him, just as one was named after songwriter Karel Hašler. 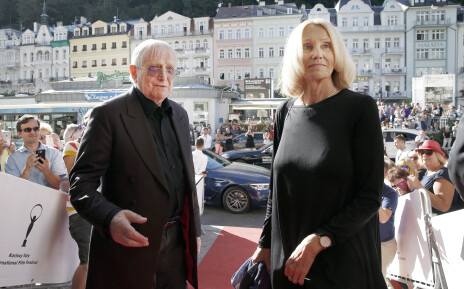