KVIFF Eastern Promises, the festival's Industry section, has the exciting mission of being a bridge between talented filmmakers and their potential partners, festivals and audiences. This year, a total of 41 film projects were screened on the 5 platforms dedicated to feature films, documentaries and new cinematographic forms in development.

In this years' Works in Progress, eight projects from countries of Central and Eastern Europe, the Balkans, the former Soviet Union, the Middle East, and North Africa were presented. Additional eight Works in Progress projects were introduced thanks to the First Cut+ program, showcasing projects that previously participated in First Cut Lab programs. The jury chose the film Wild Roots (Hungary, Slovak Republic) directed by Hajni Kis and produced by Júlia Berkes and Balázs Zachar as the winning project. A cash prize of 10.000 EUR from TRT will be given to the project.

The award goes to a visually compelling debut feature, which displays a distinct directing style and promising talent. Showing skilful ability to engage both professional and non-professional actors, the director delivers a profoundly moving and intriguing story.

The jury chose the film The Alleys (Jordan, Qatar, France, Saudi Arabia) directed by Bassel Ghandour and produced by Rula Nasser. The award consists of post-production services in UPP and Soundsquare.

The jury has unanimously decided to give the Post-production Development Award to The Alleys by Bassel Ghandour for an exciting promise of a captivating tale in which the writer-director uses genre film elements to deliver an intriguing look into a society driven by violence.

The jury saw the selection of 8 documentaries from Central and Eastern Europe, the Balkans, the former Soviet Union, the Middle East and North Africa. The Docs in Progress Award went to the project The Lines (Slovak Republic), directed by Barbora Sliepková and produced by Barbara Janišová Feglová, along with a cash prize in the amount of 5.000 EUR.

With a symphonic approach to location, character and aesthetic, and with highly skilful and cinematic and artistic choices, the jury were struck by this strong debut that demonstrates an amazing new filmmaking talent. The jury are awarding the prize to The Lines by Barbora Sliepková.

On this award, KVIFF has partnered with the Midpoint script and project development program as well as When East Meets West co-production market and Trieste Film Festival. Together they showcased nine projects from Central and Eastern Europe that have gone through development within the Feature Launch 2020 program. The jury decided to award the 10.000 EUR cash prize for further development to Usud (Serbia) directed by Stefan Malešević and produced by Andrijana Sofranić Šućur.

The KVIFF & MIDPOINT Development Award goes to an ambitious project of formal and thematic uniqueness; a comic philosophical meditation on destiny, choice, and the burden of being a human in an indifferent world. Brilliant in its conception and precise in its structuring, this highly ambitious project ventures into fresh, untreaded waters in the increasingly obvious cinema of the present.

This dystopian sci-fi romance is the kind of smart, urgent genre picture we seldom see in the region, and we're confident that the team in charge will deliver an exceptional film that will soon be the talk of the festival world.

The jury consisting of Marjorie Bendeck and Katharina Stumm awarded the film Vacuum (Ukraine), directed and written by Yelizaveta Smith and produced by Aleksandra Kostina.

Out of a once again incredibly strong selection at Midpoint Feature Launch, we have decided to invite Vacuum from Ukraine to present their project at Connecting Cottbus in November, acknowledging its international potential. Underlined by a visual concept both haunting and reflective, Vacuum suggests that we can discover a missing person's identity in the empty spaces they left behind - and what better medium to pursue this in than cinema.

Despite the challenges that all these talented professionals are currently dealing with, the presentations of all the projects were very inspiring and our one-on-one meetings were truly engaging.

Andrijana, as a strong emerging talent, is the selected producer for the next edition of Rotterdam Lab 2021. She impressed us with her personal drive towards the project, her engagement in an upcoming creative team, and her strong desire to extend her international network.

Eight projects in production or post-production stage, each transgressing the borders of traditional filmmaking were showcased during this year's Eurimages Lab Project. The prize in the value of 50.000 EUR went to the winning project Atlantide (Italy, France), directed by Yuri Ancarani and produced by Marco Alessi.

The Eurimages Lab Project Award goes to a project which brings an unsettling yet fascinating vision of a dying world.

Using the metaphor of Atlantis, the director's singular gaze brilliantly synchronises the perspective of teenagers with the sad perspective of a vanishing city. Nevertheless, like contemporary Noah's arks, the motorboats race across the Venetian lagoon, driven by the energy of youth, in a life-affirming view of a possible future. 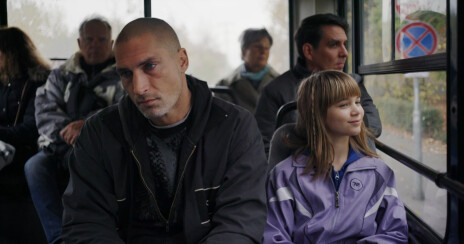