After three years, the Czech Republic has scored again in the international round of the Nespresso Talents film competition. From 740 participating entries, the jury chose three winners, including a Czech film by Daniela Hýbnerová, who thus follows in the footsteps of Daria Kashcheeva’s 2017 win. The Czech jury chose its three winners as well: a joint project by Oliver Beaujard and Nina Zardalishvili, plus films by Iryna Kachalouskaya and Lenka Drncová.

For this year’s Nespresso Talents competition, beginning filmmakers from 47 countries submitted their short vertical-format films on the subject of “A Positive Spiral.” Daniela Hýbnerová’s animated film The One About the Shirt tells the story of a shirt brought by a series of coincidences into the lives of a variety of people who all alter it in their image. “The film is based on the idea of reusing clothing and enjoying the little things in our lives,” the director says in describing the main idea behind her film. By placing second, Hýbnerová receives a 3,000 euro reward to get her career off the ground, plus an invitation to the 2021 festival in Cannes. “Daniela’s success reminds us of 2017 and the win by FAMU student Daria Kashcheeva, whose stellar filmmaking career, this year crowned by an Oscar nomination, began with Nespresso Talents. It is proof that the Czech Republic continues to be a breeding ground for excellent filmmakers, and we are glad that Nespresso Talents is an inspiration for beginning stars of film,” Nespresso’s Marketing Manager Andrea Petrová said about this year’s excellent outcome.

The winning film in the Czech finals was Flubér by Oliver Beaujard and Nina Zardalishvili. Second place went to Dance of Life by Iryna Kachalouskaya, and Lenka Drncová’s Karafiát placed third.

“What I enjoyed in all the award-winning films was their visual style and, in two cases, sense of humor and perspective, their slight dose of self-irony, and the meticulously thought-out design. Humor and wit are especially important ingredients not only in these difficult times; in my view, they are an essential part of the short format,” stated one of this year’s jurors, film producer Martin Vandas.

Another juror, the actress and director Petra Nesvačilová, adds: “I must honestly say that what I was missing in most of the films was greater care and time, but I always realize how many talented people there are. The winning films had a perfectly executed script and visual style. They are truly good short films.”

As the third juror, blogger Markéta Pavleje points out, this year’s stories also reflected the current coronavirus crisis: “A lot of the themes were inspired by the pandemic and by people’s responses to it. Also, most of the films took place in various unspecified times in history, and as we know, in times of crisis people think more about the past.”

The winning trio divide a reward totaling 5,000 euros (EUR 3,000 for the winner and EUR 1,000 each for 2nd and 3rd place) and all get to attend the 2021 Karlovy Vary International Film Festival.

All the winning films from the 2020 Nespresso Talents competition can be viewed at www.nespresso.com/talents/cz/en/contest 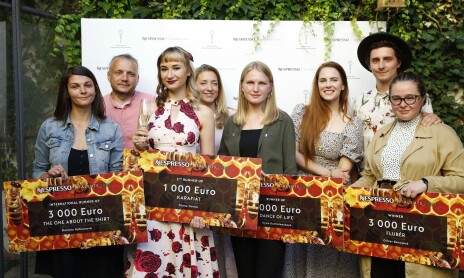