News Eva Zaoralová recognized by the Ministry of Culture

On the occasion of the state holiday on 28 October, the Karlovy Vary International Film Festival’s artistic advisor Eva Zaoralová was awarded the Ministry of Culture Award for Contribution in the Field of Cinema and Audiovisual Work.

This prestigious award was awarded to Eva Zaoralová for her many years as the artistic head of the Karlovy Vary International Film Festival and for her lifelong promotion of Czech films and filmmakers abroad. In view of the situation relating to the coronavirus pandemic, the awards ceremony could not be held, and the award was presented individually. Since health reasons prevented Eva Zaoralová from accepting the award in person, it was received in her name by the festival’s artistic director Karel Och.

Eva Zaoralová is inextricably associated with the modern history of the Karlovy Vary festival. She and the festival’s president Jiří Bartoška both helped to save the festival in 1994, and subsequently turned it into one of the most important international surveys of film. Eva Zaoralová spent many years as KVIFF’s artistic director, and during this time she systematically put together a programming team that continued her work under her successor Karel Och. She has remained closely tied to the festival and continues to actively contribute to its programming in her capacity as artistic advisor.

“Since taking over the Karlovy Vary festival, Eva and I have experienced so many things, and it is difficult to think of just a few moments to remember. In the beginning, we were both enthusiastic amateurs who approached everything with an open heart but without any practical experience. We ended up in some unpleasant situations and learned as we went along. After working together for more than a quarter century, I think I can say that we succeeded in building KVIFF into a respected brand name. And even though today’s programming team consists of her successors, onto whom she passed her experience, Eva remains an inseparable part of this team, its face. Without her, the Karlovy Vary festival would never have become what it is today,” says Jiří Bartoška, president of the Karlovy Vary IFF.

Zaoralová has received numerous domestic and international awards for her longtime activities not only with the Karlovy Vary IFF, but also for her work in film journalism, criticism, and translating.

On the occasion of the state holiday on 28 October 2010, President Václav Klaus awarded her the Medal of Merit for her work in the field of culture. She and Jiří Bartoška are recipients of a Czech Lion for Extraordinary Contribution to Czech Cinema. The French government made her a Knight of the Order of Art and Letters, and in 2012 she was elevated to Officer. On the occasion of the 60th anniversary of the founding of the Cannes Film Festival, she was presented with a plaque recognizing her for her many years of journalistic activities. She has also received the Knight’s Cross of the Order of Merit of the Republic of Poland and many other awards and commendations. 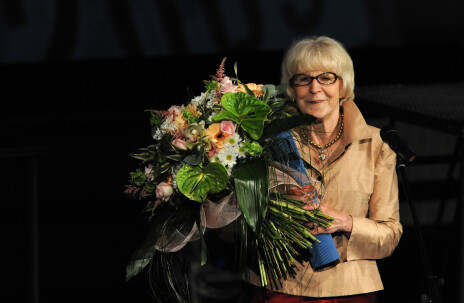