From 3 to 11 July 2020, ninety-six cinemas throughout the country hosted the unique KVIFF at Your Cinema showcase, organized by the production team from the Karlovy Vary International Film Festival. The festival showed sixteen films that had originally been scheduled for this year’s festival. In total, 36 645 people saw the films shown by KVIFF at Your Cinema.

The greatest audience interest was in a domestic entrant, director Šimon Šafránek’s music documentary Meky about Miroslav Žbirko, an icon of the Czecho-Slovak music scene. This film and the opening film Babyteeth are now playing in cinemas throughout the country, and thanks to KVIFF Distribution, on 30 July 2020 another film from the festival will come to Czech cinemas: Proxima, starring Eva Green as an astronaut preparing to go into orbit while also looking after her seven-year-old daughter. The film À l'abordage will also enter distribution early next year.

But KVIFF at Your Cinema was more than just film screenings. The festival also offered interviews with filmmakers and directors, streamed live to all the participating cinemas. The renowned international cinema magazine Varietyheld streaming interviews with some of the filmmakers whose works were shows as part of our showcase. Well-known journalist Peter Debruge interviewed directors Zeina Durra, Alice Winocour, Shannon Murphy, and Alma
Har'el within Variety Critics Corner. Also held online in virtual space was this year’s program for film professionals, KVIFF Eastern Promises Industry Days 2020. There was great interest in the live panel discussion TADY INDUSTRY (“Here Industry”) featuring representatives from a broad spectrum of Czech audiovisual professionals, who discussed the Czech film industry during the Covid-19 crisis, including its impacts and future outlooks.

The next event being planned by the KVIFF organizing team is Karlovy Vary IFF 54½. From 18 to 21 November 2020, this non-competition festival will present thirty films in Karlovy Vary. Besides screenings in four festival cinemas, there will also be a program of accompanying events.

The 55th edition of the Karlovy Vary International Film Festival will take place from 2 to 10 July 2021.

For the latest news from the festival, visit our social networks or our official website at www.kviff.com. 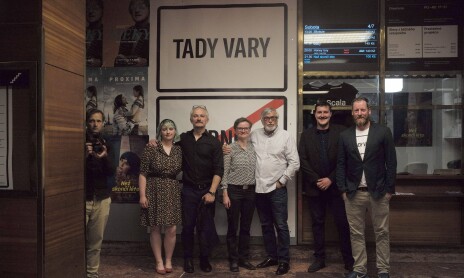