Nespresso has announced the names of the three winners of the sixth international vertical short film contest Nespresso Talents. This year’s theme “Actions Speak Louder Than Words,” inspired submissions from around the world – 993 short films from 60 countries. Of the entrants, the works of three talented filmmakers from Russia and the Czech Republic stood out above the rest. The winners were chosen by the five members of the international Nespresso Talents jury: film and television actor Mark Chao, traveler and adventurer Mike Horn, actress Zita Hanrot, director, screenwriter, and 2020 Nespresso Talents winner Faride Schroeder, and actress/director Sonia Rolland.

The jury chose the three winning entrants from among 15 short-listed films. First place went to Russian director Klim Tukaev for Postman, second place went to Czech director and editor Jan Kellner for Bagman, and third place went to Speaking in Flowers by Czech director Nicolina Sterbet. All the winners could attend the 2021 Cannes Film Festival, received a chance to engage in mentoring with film professionals, and were awarded a cash prize.

The Czech round of Nespresso Talents will announce its winners at this year Karlovy Vary IFF. The three best domestic films will be chosen by a four-member jury consisting of Daniela Hýbnerová, last year’s second-place winner in the international round with The One About the Shirt, actress and Czech Lion laureate Tereza Ramba, director and film journalist Šimon Šafránek, and creative director Tereza Hodanová, one of the most followed Czechs on the internet, whom Forbes magazine included on its “30 under 30” list. The Czech finalists can be seen at the Nespresso Café at Karlovy Vary’s Hotel Thermal, which will be open for the general public during the festival. 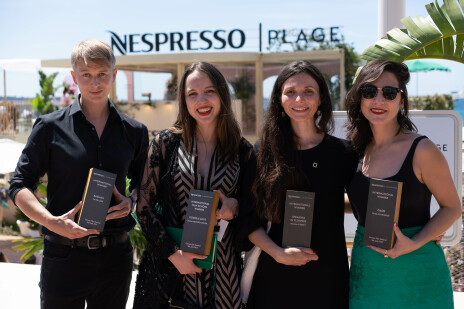