EFP FUTURE FRAMES – Generation NEXT of European Cinema will be presenting ten selected films directed by some of the most promising European film students and graduates at the 55th Karlovy Vary International Film Festival.

The young directors will be offered a two-part schedule this year, with an online pre-programme including pitching trainings and industry meetings (17 – 19 August) and the presentation of their films during the festival (22 – 24 August). The 3-day-programme on site will be rounded off by a master class.

The seventh edition of EFP FUTURE FRAMES – Generation NEXT of European Cinema in close cooperation with the festival will introduce the following up-and-coming directors with their films from: Austria, Belgium / Flanders, Denmark, Estonia, Germany, Hungary, Iceland, Poland, Slovak Republic and Spain.

EFP FUTURE FRAMES – Generation NEXT of European Cinema is supported by the Creative Europe – MEDIA Programme of the European Union and presented by Festival Scope. Partner of FUTURE FRAMES 2021 is Nespresso. Main media partner is Variety, further media partners are Cineuropa and Fred Film Radio. 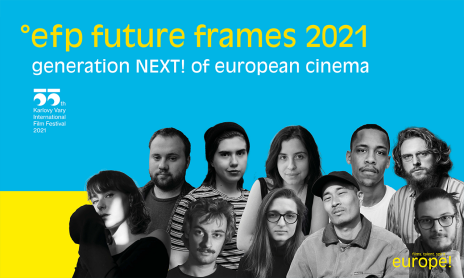