News Launch of a New Book About Věra Chytilová

The book Autorka neklidu (Author of Unrest), was symbolically christened at the International Film Festival of Karlovy Cary. The book is a critical exploration of Věra Chytilová and her films. Its editor Zbyněk Vlasák, minister of culture Lubomír Zaorálek and festival president Jiří Bartoška all came to toast to this publication, which is part of the (O)hlasy žen (Women’s Voices) series.

During his introduction, the minister of culture recalled his studies in Brno and the senior lecturer Smejkal, who founded a film club at the university. “That’s where I learned that films should also be discussed. That is why I’m glad we have a book about Věra Chytilová, a director whose work certainly should be discussed,” said Lubomír Zaorálek who also recalled his first reaction to Chytilová’s film Kalamita (Calamity): “I grew up during Normalization and Věra Chytilová was able to capture that feeling of unrest, uncertainty and lostness we all felt. This book explains why her movies were important to us, that they helped us live and understand what we were experiencing.“

The publication, which you can already buy on KVIFF, has two parts. “The subtitle ‘Věra Chytilová Through the Eyes of Czech Critics’ implies that it is a compilation of historical texts, which were published about her work from the year 1962, when she was still at FAMU, all the way to the obituaries in 2014. These are filled in by interviews with Jindřiška Bláhová and Kamil Fila, who discuss Chytilová through a current critical lens,“ said the book’s editor Zbyněk Vlasák, who is the chief editor of Salon, the cultural section of the Právo newspaper. 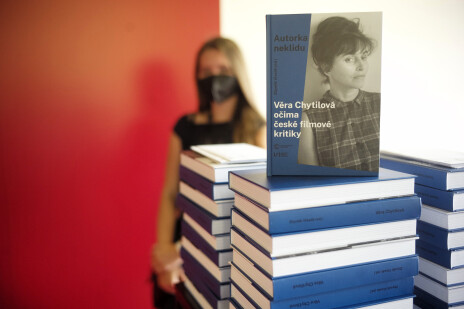