News Two sisters introduce one of the winners at Cannes

Director Jonas Carpignano numbers among the outstanding talents of Italian film and his works are regularly shown at the Karlovy Vary festival. The director introduced the first two at KVIFF in person; however for family reasons he could not accompany his third one, Chiara, which won the Directors' Fortnight section at Cannes this year.

But when KVIFF Artistic Director Karel Och sent him a photo of the festival poster for the film on the river Teplá, Carpignano immediately forwarded it to the actress of the title role Swamy Rotolo. "And she said she'd never seen such a big picture of herself and that she has to come," said Karel Och while introducing the film, in which the drama of a girl who discovers a crucial secret about her family provided the greatest emotional experience of this year's Cannes.

Thus the festival very quickly arranged for not only Swamy to visit, but also her sister Grecia Rotolo, who plays Chiara's older sister in the film. "It's a kind of family film – our mum, dad, and aunt are all in it too... It takes place in our hometown, so you can see what the situation is like there. But it's not our story," pointed out Swamy. 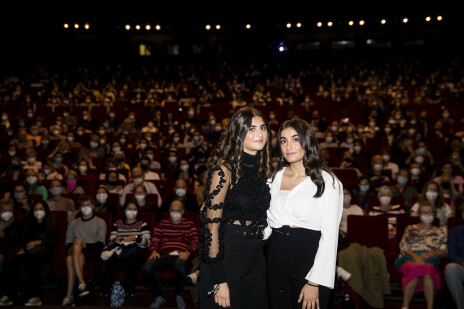