As Far as I Can Walk, a humanistic story on the need to find one's place in the world and about a love whose deepest proof may be the most painful, won the Crystal Globe, the main prize of the Karlovy Vary IFF. It also received the 55th year's prize for best actor Ibrahim Koma, and a Special Mention for director of photography Jelena Stanković.

"I couldn't be more surprised. Thank you to the festival – it's great to be in the cinema again. Ethan Hawke thanked his wife, so I want to thank mine as well, the film's cinematographer. I also thank the producers – we had to collect money from five countries. And above all I want to thank our actors, they were simply wonderful. It's an honour to receive this award here, because Czech films really always influenced me, the ones from the Czech New Wave and those by Jan Svěrák," said Stefan Arsenijević in thanks, having based his new work about two African immigrants in Serbia on a medieval Serbian poem.

The Special Jury Prize for the first Karlovy Vary festival where documentary films were included alongside feature films in the main competition, went to the documentary Every Single Minute. In it, Erika Hníková follows a Slovak couple who decided to bring up their child according to Kamevéda, a complex approach to developing the child's motor abilities and intellect.

German Dietrich Brüggemann was declared best director for his new work Nö and the best actress was Éléonore Loiselle from the Canadian drama Wars. British actor Vinette Robinson earned a Special Mention for her role as a chef in the film Boiling Point, and the third Special Mention went to the Croatian film The Staffroom.

The second competition section East of the West was won by Nuuccha, a suggestive Yakut drama on the consequences of colonisation and forced assimilation of nations within Tsarist Russia. The jury awarded its Special Prize to the film Sisterhood and Special Mention to the Czech documentary Intensive Life Unit. The Právo Audience Award went to the opening film of the 55th KVIFF Zátopek, which has been showing at Czech cinemas since Thursday. 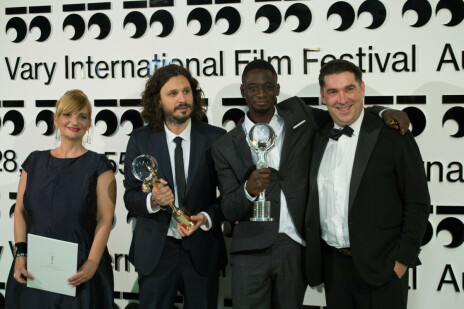