The Karlovy Vary International Film Festival and the Czech Philharmonic have joined forces to present the first annual Variations, which will offer audiences several unique events in the fields of music and film.

On 19 and 20 November 2021, Karlovy Vary will host the pilot edition of this event aimed at adding to the city’s range of cultural activities.

“The Karlovy Vary film festival has been an integral part of the Czech Republic’s cultural landscape for decades. One integral part of every film is music, and so we have tried to find a way to bring these two independent fields of art – film and music – together. We couldn’t have found a better partner for this undertaking than the Czech Philharmonic, which embodies a unique tradition in the field of Czech music,” says the festival’s president Jiří Bartoška.

The Friday evening opening ceremony of Variations at the Karlovy Vary Municipal Theatre features an exclusive pre-premiere of Italian director Paolo Sorrentino’s award-winning film The Hand of God, which was made for Netflix and except for Variations 2021 will not be shown at Czech cinemas.

“This collaborative effort between the Karlovy Vary IFF and the Czech Philharmonic is based on the emotional experience that both leading institutions have long sought to impart on their audiences, meaning the captivating emotions offered by a masterfully performed musical composition or an amazingly shot film. And The Hand of God, a Netflix production by the greatly admired master Paolo Sorrentino, which is being presented exclusively on the big screen as part of Variations 2021, certainly fits the bill,” says the Karlovy Vary film festival’s artistic director Karel Och.

The public can see two screenings of The Hand of God, which took home the Grand Jury Prize at the recent Venice film festival: on Friday 19 November, and on Saturday 20 November, both at 8pm at Kino Čas.

On Saturday 20 November at 7:30pm at the Karlovy Vary Municipal Theatre, the Czech Philharmonic, under the direction of conductor Jakub Hrůša, will present two iconic works by Antonín Dvořák, his Eighth Symphony and his Cello Concerto in B minor with star solo cellist Kian Soltani.

“Our goal is to bring the unique atmosphere of Karlovy Vary together with music and film at the highest level, to bring the festival atmosphere to town during the main concert season, and to offer something for everyone interested in music and film,” says David Mareček, general director of the Czech Philharmonic, adding: It’s important to us that, in relation to Variations, the modifier ‘unique’ be more than just an empty word. The program has been put together exclusively for this occasion and cannot be seen anywhere else.”

On Saturday 20 November at 5pm at Kino Čas, there will be a special pre-premiere screening of the Czech Television fairy tale How Not to Marry a Princess by director Karel Janák and starring Anna Fialová and Marek Adamczyk.

“This year’s Variations should be a kind of foretaste; for the future, we are planning a four-day event that should also have an educational dimension. Many people feel unsure about classical music, and we would like to give them the chance to spend the weekend in Karlovy Vary, to enjoy the city, to see an interesting film, to listen to beautiful music, and perhaps to overcome this uncertainty. I am convinced that it can be a cleansing and enriching experience,” says the Karlovy Vary IFF’s executive director Kryštof Mucha in describing the event’s long-term goal of enriching the cultural life of the city and region of Karlovy Vary. 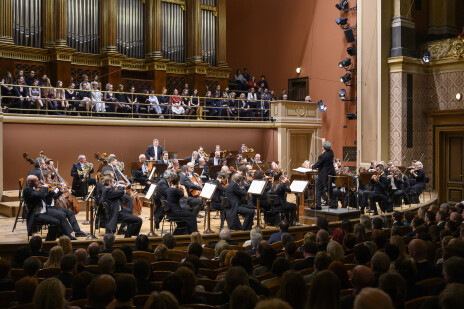