The first edition of this collaborative effort with the Young Academy, a unique project of the Association of Audiovisual Producers (APA) for filmmakers aged thirty-five and younger, presents a series of talks covering a broad spectrum of creative approaches to the development and production of short-form audiovisual works. The industry program featuring domestic and foreign film professionals is open to the public and is free. It is accompanied by the Pragueshorts Selection 2022 screening of short films. For the full program, see the Pragueshorts website.

The series of lectures and presentations held at the Bio Oko cinema on Wednesday and Thursday, 6 and 7 April, features foreign and domestic guests from various fields of film, advertising, and computer-game production. Audiences will also learn about KVIFF TALENTS, a newly created program for promoting bold and dynamic approaches to cinema.

The program further includes a discussion with Jan P. Muchow on the relationship between music and narrative in the short film, a debate on the role of the agent and casting director with Petra Vaněk Svarinská, Ladislav Krapek, and Vica Kerekes, and a talk on visual effects with producer and VFX supervisor Jan Malíř of UPP. Coming all the way from France is director and screenwriter Timothée Hochet, whose successful short film Calls inspired a new Apple TV series. The Austrian duo of Leonhard Müllner and Robin Klengel will discuss creative partnerships and gaming as an artistic medium, and Belgian producer Jason Felstead and Czech director Jára Moravec will give a talk on developing young talents on the international market.

Also on the program is Pragueshorts Selection 2022 – four blocks of film screenings with a focus on the most successful and distinctive short films from last year. “Check the Czechs” includes Diana Cam Van Nguyen’s Love, Dad, winner of a Czech Lion and a Czech Film Critics’ Award, and Olmo Omerzu’s The Last Day of Patriarchy starring Eliška Křenková. Two blocks devoted to international films include the Locarno Festival winner Neon Phantom and the Cannes-winning All the Crows in the World. And “First Service – Famous in Shorts” features early works by Agnieszka Holland, Thomas Vinterberg, Ruben Östlund, Taika Waititi, and Jane Campion. Tickets may be purchased online from the websites of the Bio Oko, Kino Pilotů, Světozor, and Kino 35 cinemas. 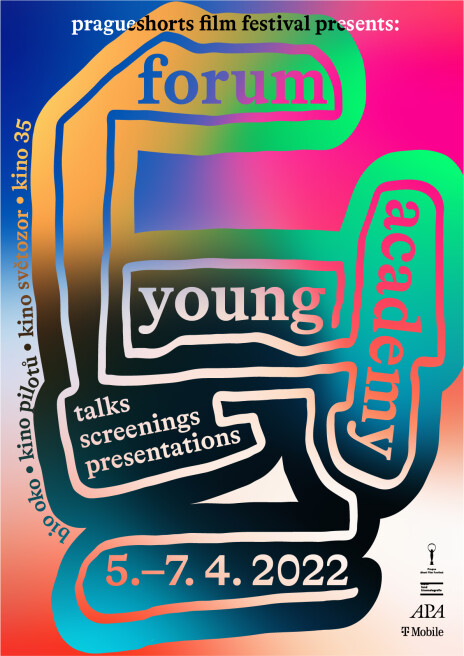