The Karlovy Vary festival will support Ukrainian filmmakers and the country’s film industry through a unique collaborative project with the Odesa International Film Festival (OIFF).

The unprecedented military assault on Ukraine has been accompanied by fundamental limitations to the country’s cultural life. The Karlovy Vary festival expresses its full support for Ukrainian filmmakers and festival organizers, and will thus host the Works-in-Progress program of the 13th Odesa International Film Festival, which cannot be held there because of the war. In Karlovy Vary, the program will be known as OIFF WIP Selection.

“We are convinced that broad solidarity with war-afflicted Ukraine must also include support for the country’s cultural life, which at this moment has come almost to a halt. As a film festival, we have thus tried to find ways of supporting Ukrainian cinema, and we are glad that we have managed to work with the Odesa film festival to find a meaningful form of cooperation,” says Hugo Rosák, head of KVIFF’s Industry Department.

„The current conditions of the war in which the Ukrainians find themselves have a direct impact on the film industry. Therefore, we were offered to hold the industrial part of the Odesa International Film Festival as part of the Karlovy Vary International Film Festival. We are extremely grateful to our colleagues for this opportunity. For the opportunity to show Ukrainian cinema, Ukrainian talent and culture to the world”, – Anna Machuh, General Director of OIFF said.

Works in progress at the Odesa International Film Festival is a presentation of the completed feature-length films by their producers and directors to be distributed in 2022-2023.The main goal of the Work in progress presentation is to promote Ukrainian films in the world and local markets and to attract the attention of international distributors and also to find the partners for future projects.

The selection committee of the OIFF selects 8-12 feature film projects in the final stage of shooting or in post-production produced in Ukraine or in co-production with Ukraine. Projects should meet the international quality standards to be demonstrated in frames of the Works in progress presentation 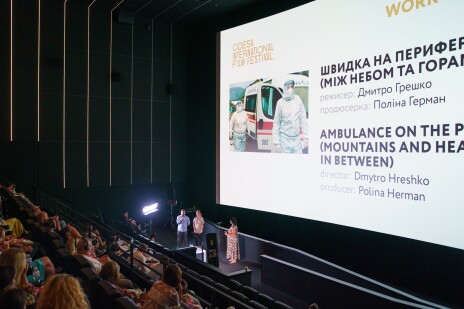