The showcasing of projects to industry professionals will take place in Karlovy Vary during this year's KVIFF Industry Days:

For Works in Progress, a total of ten fiction and documentary feature films in the late stage of production or post-production from the countries of Central and Eastern Europe, the Balkans, the former Soviet Union, the Middle East, and North Africa have been selected. The following projects will compete for prizes in a total value of 100,000 EUR:

The Ice That Still Supports Us (Estonia, Lithuania)

Self Portrait Along the Borderline (Georgia)

Details about the projects can be found here. The presentations will take place on Monday, July 4 at 14.00 CET.

​Works in Development - Feature Launch is a platform organised as a collaboration between KVIFF, the MIDPOINT Institute international script development programme, When East Meets West co-production market and Trieste Film Festival. The following nine projects, which have been developed within the Feature Launch programme and are now looking for co-production partners, will compete for the 10,000 EUR Development Award:

You Better Be (Bulgaria)

The First Week of August (Croatia)

Side by Side (Czech Republic)

My Name Is Lily (Cyprus)

All My Friends Soon Will Be Dead (Latvia)

Flower Is Not a Flower (Romania)

Details about the projects can be found here. Presentations will take place on Monday, July 4 at 11.00 CET.

First Cut+ is a programme created for boosting the competitiveness and marketability of feature films that previously participated in First Cut Lab. The programme was launched in 2020 through close cooperation with two dynamic and well-established film industry platforms: Trieste’s When East Meets West and Karlovy Vary IFF’s Eastern Promises Industry Days. Each year, it promotes a portfolio of 16 fiction feature films at the stage of post-production – eight of them will be presented in Karlovy Vary. The most promising projects are awarded by the international jury with service packages and cash prizes that allow them to finish their films.

Under the Naked Sky (Netherlands, Belgium)

I Love You More (Kosovo, Albania)

Charcoal / When My Life (Brazil, Argentina)

Details about the projects can be found here. Presentations will take place on Tuesday, July 5 at 14.00 CET.

Odesa International Film Festival WIP Selection In full support of Ukrainian filmmakers and festival organizers, this year's KVIFF will host the Works-in-Progress programme of the 13th Odesa International Film Festival, which cannot be held there because of Russian aggression. Eight full-length film projects in the final stage of shooting or in post-production produced in Ukraine or in co-production with Ukraine, selected by the OIFF selection committee, will be presented by their creators. The most promising project will receive a prize in the amount of 10,000 EUR.

U Are the Universe (Ukraine)

Do You Love Me? (Ukraine)

Details about the projects can be found here. Presentations will take place on Tuesday, July 5 at 11.00 CET. 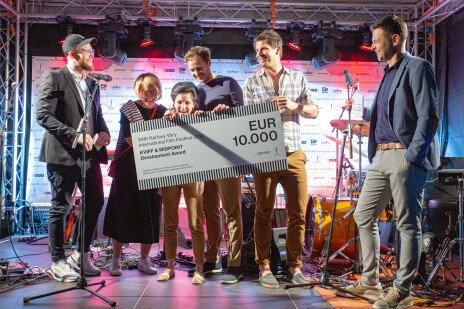