At the closing ceremony of the 56th Karlovy Vary International Film Festival, the Crystal Globe for Outstanding Artistic Contribution to World Cinema will be presented to Australian Oscar- winning actor Geoffrey Rush.

One best actor Oscar and three Oscar nominations, two Golden Globes and four more nominations, an Emmy and a Tony Award – this is but a short selection of the dozens of awards that film and theater actor Geoffrey Rush has earned over the course of his career. His career in theater began at the Queensland Theatre Company and continued via studies in London and Paris, his own productions, and the post of director at and head of the Belvoir Street Theatre Company, where he helped to discover numerous acting talents. He also appeared on stage at many leading Australian and foreign theaters.

An important turning point in his cinematic career came in 1996, when he excelled in the role of composer and pianist David Helfgott, a man caught between genius and madness in Scott Hicks’s Shine. His unique performance rightfully earned him an Oscar, a Golden Globe, and a BAFTA. Two years later, he was again nominated for an Oscar, this time for his role in the historical romance Shakespeare in Love (1998), which also earned him a BAFTA and a nomination for the Golden Globe Awards. In 1998, he appeared in two period films, Elizabeth and Les Misérables, the latter of which director Bille August shot partially in Prague and elsewhere in the Czech Republic.

Another historical role – his depiction of the eccentric Marquis de Sade in Philip Kaufman’s Quills (2000) – brought another Oscar and Golden Globe nomination. In 2003, he appeared in the first installation of the Hollywood blockbuster series Pirates of the Caribbean, eventually portraying Captain Barbossa in five parts, from The Curse of the Black Pearl (2008) all the way to Dead Men Tell No Tales (2017).

In 2004, Rush played the legendary comic actor Peter Sellers in the HBO miniseries The Life and Death of Peter Sellers, a performance that earned him an Emmy and a Golden Globe.

Despite his work in cinema, Geoffrey Rush never left stage acting behind. In 2009, he won a Tony Award for playing the lead in Ionesco’s Exit the King.

Geoffrey Rush reconfirmed his exceptional acting talents when he appeared as King George’s speech therapist Lionel Logue in the drama The King’s Speech (2010) – a role that earned him nominations for an Oscar and a Golden Globe, plus a win at the BAFTA Awards and numerous other commendations.

Rush has played historical figures throughout his career, and in 2017 he continued this tradition by portraying Albert Einstein in the miniseries Genius and the painter and sculptor Alberto Giacometti in Final Portrait.

In 2011, Geoffrey Rush became the founding president of the Australian Academy of Cinema and Television Arts, and in 2012 he was named Australian of the Year for his contribution to the arts in his home country. Geoffrey Rush is represented by CAA.

As an homage to Geoffrey Rush, Karlovy Vary festival will screen the films The Kings Speech, Quills and Shine. 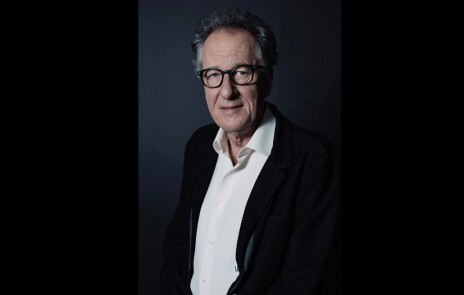