Liev Schreiber was the star guest of the 56th KVIFF on Saturday, July 2. The American actor, director and screenwriter presented the non-profit organization BlueCheck Ukraine. "Our goal is to distribute funding as quickly as possible to the frontline in Ukraine," he said at the beginning of the press conference. "My celebrity status helps me to spread information about what is going on," he told the journalists.

Schreiber himself has Ukrainian ancestry through his grandfather. That was one of the reasons why he helped on the Polish-Ukrainian border and visited Lviv, Ukraine, in the spring. He played two video clips from his trip at the press conference. The first was a report on the Lviv Orchestra, the second an interview Schreiber made with the leaders of the Kidsave organization. "Some of the orphans evacuated with the help of this initiative have found refuge in the Czech Republic. I would like to thank the Czechs who contributed to their rescue," Schreiber expressed his gratitude.

He says he certainly does not seek inspiration in the current situation. "An acquaintance wanted me to make videos with Ukrainians and ask them how they felt. That made so angry – we feed off a newsfeed of fear and suffering," he noted, adding that war is surely full of powerful stories, but this time, we are part of the story as a society. "Now is definitely not the time to tell stories. And I am too tall to play Zelensky," Schreiber concluded.

For more information on the BlueCheck Ukraine initiative, visit this site. 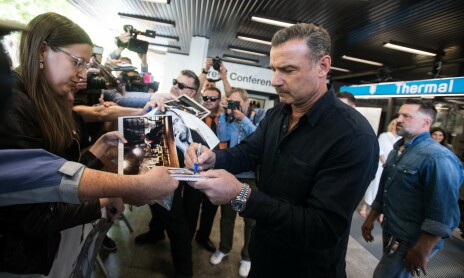