News Karel Schwarzenberg in the role of a father

A lesser-known side of one of the most important Czech post-November 1989 politicians was outlined in a documentary My Father, The Prince screened in the Pupp Cinema. Critical interviews between Karel Schwarzenberg, his daughter Lila and co-director Lukas Sturm gave birth to a multi-layered documentary, which received an endless standing ovation, even though it was created partly by accident. “Lila came up with the idea and we were originally only going to shoot for two days. As we delved deeper and deeper into the conversations between her and Karel, we decided to expand our vision further,” revealed Sturm.

“I had an almost therapeutic five-hour conversation with Lukas about my relationship with my father,” describes Lila Schwarzenberg the course of filming, which focuses on her coping not only with her unconventional father, but also with herself. She illustrates the difference between their personalities by an example – Karel Schwarzenberg considers the 1990s and his cooperation with Václav Havel to be his happiest period. “The happiest time for me was when my children were born. But I never had the opportunity to change the fate of an entire country,” Lila Schwarzenberg confided.

Karel Schwarzenberg also answered some questions. “Certain reflections and crises in my daughter’s life I did not notice, so I feel I know her much better now. Our relationship, however, has remained very cordial,” he concluded. 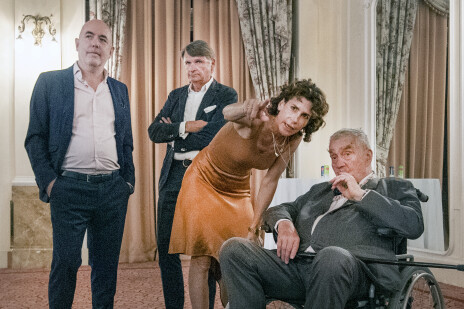