News Ukrainian delegation to Butterfly Vision stirred up a debate

The delegation to the film Butterfly Vision presented its work, which competed this year in the Cannes Film Festival section Un Certain Regard, in the Small Hall. Besides the director Maksym Nakonechnyi and the main actress Rita Burkovska, who then answered questions in the discussion after the film, the audience was also welcomed by the film’s composer Dzian Baban, producer Darya Bassel and Czech co-producer Dagmar Sedláčková.

“I would like to emphasise the great power of art and cinema, especially in times of war and crisis. It is important to keep filming and capturing the transformation of the world. When we stop communicating, we stop understanding each other. And I would like to thank the filmmakers for the themes they raise and for the tenacity and strength with which they fight for their country,” said Sedláčková in her moving introduction to the Ukrainian filmmakers.

“This film arose from a documentary almanac about women in the military. I listened to their stories, and they made a great impression on me. There was also a woman who was secretly using a male nickname so that the enemies wouldn’t know who she was. She had an agreement with her colleagues that if she were to fall into captivity, they should shoot her instead. This was really frightening but it inspired me to write this story,” Nakonechnyi recalled.
​
The discussion on the film was largely concerned with the current war situation. “It was extremely important for us to meet real people and listen to their stories. We met a number of prisoners of war and war veterans. I could feel immense energy coming from them, and that helped me with my acting,” sums up Burkovska her experience with the filming. 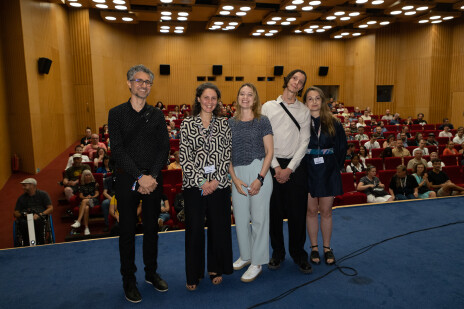