Another KVIFF Talk of this year’s festival was given by Molly Marlene Stensgaard, a member of the main jury and a Danish film editor best known for her work with Lars von Trier. She graduated in 1993 and shortly afterwards began working on Trier’s series The Kingdom. Since then, she has worked on most of his films, including Nymphomaniac, Melancholia, Dogville and his latest, The House That Jack Built.

“If there’s one thing Lars trusts me on, it’s my judgment of an actor’s performance. After all these years, we don’t have to look for new ways to communicate with each other, but at the same time we have to be careful not to rely too much on what we know,” Stensgaard described the creative process. “We both found that we don’t know much at the beginning of the editing phase, so instead of useless talking, we take the first idea that comes to us and try it out. Even ideas that look crazy at the beginning may work in the end,” she said, adding an example from Nymphomaniac, in which Trier (at the time deeply influenced by reading Proust) often resorted to novel-like departures from the main narrative line.

“The dark editing room is depressing for me, I have to keep the lights on and the windows open all the time. I like interacting with other people, but I also appreciate solitude during which I can concentrate on my work. It’s hard to work in this business if you don’t enjoy at least a little solitude,” Stensgaard explained the specifics of the editing profession, which she is currently moving away from – as a screenwriter, she has several projects in the pipeline. 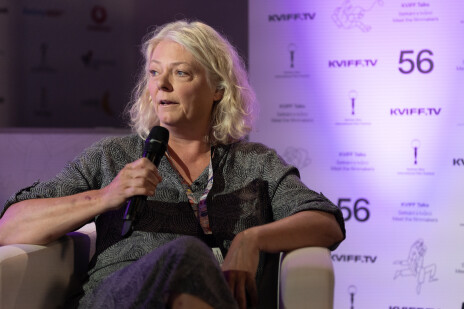