News Fruit of Paradise – a tribute to Zdeněk Liška

Pavel Klusák, music publicist and member of the jury of the Proxima competition, presented Věra Chytilová's film Fruit of Paradise at the KVIFF. It forms a separate section of the Tribute to Zdeněk Liška in honour of this year's 100th birthday of the famous film composer. "He was a classical composer, but also an experimenter and avantgardist. In this film, both these aspects of Zdeněk Liška meet, and that is why we chose to screen it," Klusák explained to the audience at the Karlovy Vary Municipal Theatre.

"At the end of the 1960s, Věra Chytilová had a strong position, but Zdeněk Liška was already an unquestionable legend. They met here for the first and last time," he recalled. It was during the 1960s that Liška composed the music for famous Czechoslovak films such as The Shop on Main Street, Marketa Lazarová, The Valley of the Bees and The Cremator. He had been working in studios in Zlín since the end of the Second World War and matured as a composer thanks to his collaboration with Karel Zeman. "He left almost no interviews behind, so his work has only minimal commentary. However, he once said that he composed only under pictures," Klusák explained the core of Liška's work, which was composing music for about 150 feature films. 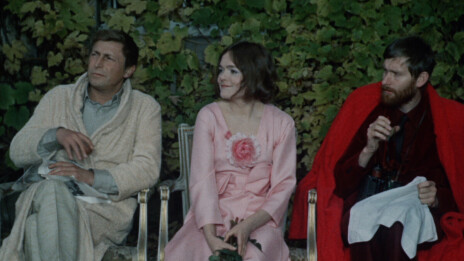