The 56th Karlovy Vary IFF showcased the very first flight of KVIFF Talents – eleven projects ranging from VR game or animated webseries to feature film that were selected by KVIFF for their creativity and international ambition. By inviting the filmmakers to Karlovy Vary for a series of networking, pitching and mentoring events, the festival seeked to connect these original concepts in various stage of production with potential production partners and investors, as well as presenting them to the audience and international press.

“We believe that KVIFF has a unique potential to help develop new films by highlighting and mentoring them. We're developing the program in several steps – we started this year with Czech and Slovak projects, as its a pilot edition. The Czech system of film funding is very limited, so we wanted to create an alternative way to seek funding,” KVIFF's Executive Director Kryštof Mucha said during the Creative Czechia conference, one of the events where the KVIFF Talents were showcased.

The first showcase, dedicated to fílm industry and wider audience, took place on Monday, July 4 in KVIFF.TV Park. Hosted by Linda Bartošová, the creators presented the eight projects selected for the Creative Pool, a programme that seeks to support audiovisual concepts no matter the length or genre. The authors of Don't Light My Fire (a short mockumentary by David Payne and Tomáš Navrátil), Give It Take It (an animated web series by Michael Přibil, Matouš Valchář and Karel Větrovský), Sunny Boys (feature film by Jan Kubíček and Alice Krajčírová), K-point (music video, short and feature film by Šimon Šafránek), I Will Drive You Yesterday (VR narrative game by Kateřina Hanáčková), Orla (experimental fairy tale by Marie Lukáčová), You Can Tell Us (feature film by David Semler) and Pig Slaughter (feature film by Adam Martinec) were then followed by the three feature films selected for the Feature Pool. This part of the KVIFF Talents programme is dedicated to feature films with potential to be made fast and with low budget (5 million Czech crowns, ie. approximately 200,000 EUR). The pilot edition consists of Skinny Bitch (feature film by Michael Hogenauer), Luigi (feature film by Eliška Kováříková, Kateřina Kováříková and Adam Struhala) and The Hour Between Dog and Wolf (feature film by Terézia Halamová). You can stream the whole presentation on KVIFF.TV (in English).

A day later, nine of the KVIFF Talents then took part in the schedule of Creative Czechia, a conference organised by Rockaway Capital and focused on innovative local projects and technologies. The KVIFF Talents' mission was introduced by Kryštof Mucha and KVIFF's Head of Industry Hugo Rosák, who's responsible for the programme: “We know that creativity can be very risky, and not everybody wants to take the risk of investing in it – so the festival decided to remove this roadblock by focusing on low budget films and wide array of genres and formats.” Each of the filmmakers then had a few minutes to “elevator-pitch” its project to a selected network of festival's partners and potential investors attending the conference. The projects was presented with a short clip that  introduced the filmmakers and their creative vision, followed by a short interview with the conference host Yemi AD. The recording of the KVIFF Talents pitches as well as the whole event is available to stream on KVIFF.TV (in Czech).

Besides these pitching sessions, the filmmakers had a workshop on Low-budget filmmaking with experienced film producer Katriel Schory, a long-time executive director of the Israel Film Fund and Midpoint Institute tutor. This inspirational mentor was also available for a one-on-one meetings where the creators could consult with him their particular issues and projects' needs. A several networking events such as cocktail with the international press, partnered by HBO Max and Variety were also part of the Talents' programme in Karlovy Vary.

This festival agenda, however intense, is just a beginning, as KVIFF Talents is a year-round programme. The selected creative teams in both pools will now receive financial support for development – 50,000 CZK for selected Creative Pool projects and 120,000 CZK for the three Feature Pool projects, whose scriptwriters will also be given the opportunity to participate in a creative residency in Karlovy Vary.


More information on the KVIFF Talents programme and projects is available here or at talents.kviff.com (in Czech) 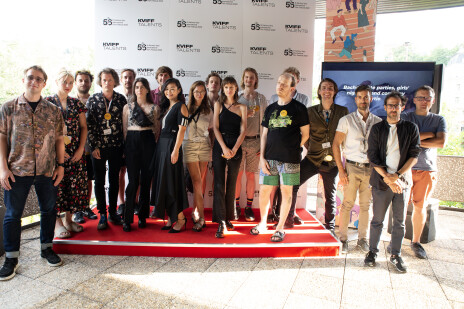