In working with the character that earned him an Oscar for his supporting role, Del Toro revered the famous theorist Stanislavsky: "Every character has a problem. And the actor has the job of solving that problem." For him, information gathering and research are essential before the filming. "There is potential to learn something everywhere you look. There's always something that plants a seed of an idea or a thought in your brain. In Karlovy Vary, for example, it was the Tros Sketos show – I feel like I totally understood what they were trying to convey," Del Toro said.

Karel Och, Artistic Director of the KVIFF, pointed out that the guest star was well versed in Czech cinema: "Benicio Del Toro knows not only masterpieces such like Marketa Lazarová or Miloš Forman's films, but also Alfred Radok's Distant Journey. He stunned me when he told me, just by the way, that the young Rudolf Hrušínský appeared in Higher Principle."

At the post-screening talk, Benicio Del Toro recounted, among other things, his collaboration with Steven Soderbergh, who directed Traffic. "He asked me how I imagined the ideal relationship between an actor and a director. This has never happened to me before," the actor confided to the audience. "The director should listen to the actor, support him and work with him," thinks Del Toro. 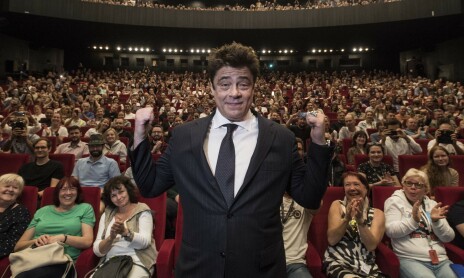