“I am a practicing Catholic, yet have I never had a chance to play a priest in a film. On the other hand, some of my friends practice completely different things but have already played one”, says host Marek Eben, referring to the film Forgotten Light and also to KVIFF President Jiří Bartoška and his role in the film Sekal Has to Die. “Boleslav Polívka is perfectly eligible for such a role, as many a priest could be envious of his kindness and empathy”, he commented at the Grand Hall screening.

The legendary Czech comedian presented the film, which won the best actor award at KVIFF, with a typical jest. “I can see portraits of myself everywhere. The organizers have done a good job and there are even several VIP areas – for the Very Important Polívka”, he joked before the screening. “I am really grateful I can take part in this festival even though I am almost 73 – thank God for that”, he added. Director Vladimír Michálek thanked screenwriter Milena Jelinek and musician Radim Hladík. “And I also want to thank the festival to have put me under a pressure I had not experienced for several years.”

Actress Veronika Žilková greeted the festival with a story as well: “When we shot a film with two priest roles played by the two biggest Czech comedians, the Church was shocked. All Church officials said they would not come to the premiere. Two years later, I learnt that priests in Czechia were recommending Forgotten Light as an absolution.” 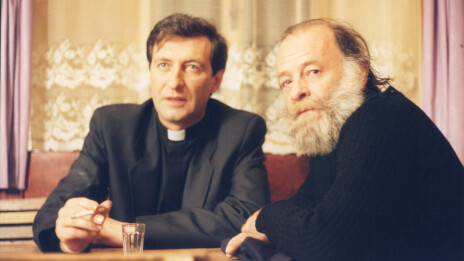