The KVIFF President’s Award was presented to actor Bolek Polívka at the start of the closing ceremony. “I am touched and full of joy,” said Polívka at the end of his acceptance speech, reflecting on his long and rich career with his unique humour. “I console myself with the idea expressed by Goethe: A handsome young man is a freak of nature. A handsome old man is a work of art.”

The second to receive the KVIFF President’s Award was actor Benicio Del Toro. “It’s strange to look at all the movies I’ve made. I don’t know how I got there – maybe it was luck, maybe talent, maybe perseverance. But my work is a by-product of many people’s trust in me, even at times when I didn’t believe in myself,” said Del Toro, recalling the people who helped shape his professional life – including actor James Caan, who passed away a few days ago. Del Toro went on to thank the audience because “the viewers breathe new life into a film every time they watch it”. The American actor also mentioned the support for Ukrainian filmmakers through the KVIFF Works in Progress platform, adding that he was happy to receive an award from a festival that is trying “to make sure that culture doesn’t become a casualty of war”.

The Crystal Globe for outstanding artistic contribution to world cinema went to Geoffrey Rush, who has been entertaining audiences in Karlovy Vary since Wednesday. “Good evening Brno!” said Rush, leveraging his ability to pronounce a consonant cluster. He said that the Crystal Globe was a mysterious crystal ball in which he could see his past. “In 1977, I saw Bolek Polívka and Boris Hybner – and the performance was simply breathtaking. Bolek, you have been my man-muse. I’ve looked up to you, I’ve wanted to be like you,” the Oscar-winning actor paid tribute to the Czech artist.

He also recalled his experiences with the Black Light Theatre in Prague, Miloš Forman’s films, filming and living in Prague, and meeting Václav Havel. “Thank you for the recognition of my career, but above all, I appreciate that my imagination could have been so often and strongly inspired by my experiences from visiting the Czech Republic,” said the charming Australian. 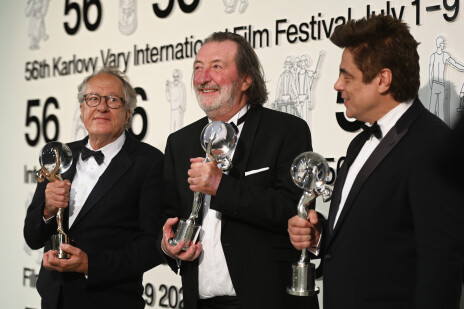