Many years after first airing The Kingdom, Denmark’s enfant terrible Lars von Trier presents a third installment of his cult series, and thanks to Aerofilms and KVIFF.TV Czech audiences can see it shortly after its premiere at the Venice film festival. The third series, titled Exodus, comes to cinemas and VOD in early autumn, but even before its Czech premiere, local cinemas and KVIFF.TV will be showing both original series set in a Copenhagen hospital. Also this fall, audiences can look forward to an almost complete retrospective of the king of Scandinavian cinema.

The mysterious hospital comes back to life

With the third installment of The Kingdom, von Trier brings his internationally acclaimed classic from the nineties to a conclusion. This ghost story about a hospital built on top of old bleach ponds in Copenhagen – where evil has put down roots, where medical science is engaged in a daily battle with itself, where Swedes curse Danes, and where the mysterious and unexplainable come together in a mixture of horror and humor – gained cult status relatively quickly, and audiences have waited a quarter of a century for its conclusion.

In Exodus, we meet a new central figure, the sleep-walking Karen, who, strongly influenced by the original ghost story, goes looking for answers to unresolved questions from the first two installments in the hope of saving the hospital from doom. One night in her sleep, the desperate woman wanders into the dark and inexplicably finds herself in front of the hospital. And so, many years later, the gates to the Kingdom are opened anew...

Czech audiences can also see The Idiots, a dark comedy about a group of intellectuals with a weird hobby (pretending to be handicapped), the heart-rending musical Dancer in the Dark with singer Björk shining in the main role, von Trier’s English-language debut Breaking the Waves, the social drama set in 1930s America Manderlay, his provocative reflections on womanhood Antichrist, the gentle mediation on the end of the world Melancholia, the story of one unusual woman Nymphomaniac, and the self-conscious psychothriller about a mass murderer The House That Jack Built. 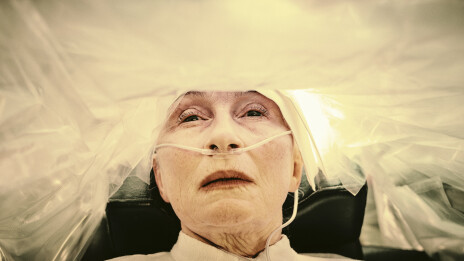