The primary focus of this picture is to accurately portray the spy network of the French resistance during World War II. Although the film incorporates actual events and real people, it is nevertheless emotionally empty, even unpleasantly so, giving it credibility and uncommon power. The de-heroizing approach to characters is in itself non-traditional, with the resistance fighters transformed into reliable machines.

With this suspenseful story celebrating the French resistance during the Second World War, the director returns to a relatively personal topic. Although details of his activities in the resistance remain for the most part a mystery, his participation in the illegal resistance is on the level. In 1943 he resided in London where he read two of the most significant works of French literature created during the war – The Silence of the Sea and Army of Shadows, the latter by Joseph Kessel. Melville began his film career with an adaptation of the first volume, not coming to the second of the two novels until the age of 51. The script is fairly faithful to its literary inspiration, although the director did allow himself a few minor changes. The main storyline involves a detailed description of the workings of the resistance’s spy and sabotage network, portrayed almost like a detective film but with real figures. While the author of the literary work had to conceal the identities of his heroes, Melville intentionally reveals them since he considered them the most precise expression of the essence of the resistance. At the same time, by omitting displays of strong emotion, he preserves a true image of the period. It is precisely this elevation of the interests of form over sensation that is Melville’s characteristic approach to ambiguity, which is strongly present in almost all of his films. Special attention is also paid to color quality in Army of Shadows. The image verges on monochromatic chiaroscuro with shades of beige, always in single-color tones. 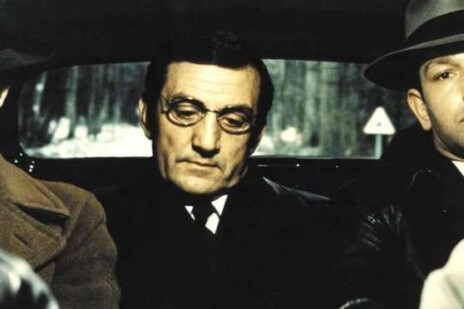