Archive of films Kick Off / Kick Off

Refugee families fill a derelict football stadium in the city of Kirkuk. Energetic and lovestruck Asu decides to cheer up those close to him by organizing a football tournament. Wind blows across the playing field, a horse canters, a helicopter circles above, and explosions can sometimes be heard in the vicinity.… Can the athletic spirit overcome the sorrow and consequences of war?

Three hundred families have taken refuge in improvised shelters in a derelict football stadium in the city of Kirkuk. They returned to their country after the fall of Saddam Hussein only to find that their dwellings were destroyed by the war. The local authorities want to clear the area. Enterprising Asu wants nothing more than to please his depressed brother, who lost a leg to a landmine, and perhaps get a little closer to his attractive neighbor Hilin. To these ends, he decides to organize a football tournament where the members of various nations will compete: Kurds, Arabs, Turks, and Assyrians. He even earns the support of a television station. Wind blows across the playing field, a horse canters, a helicopter circles above the stadium, and bombs can sometimes be heard close by.… Can the athletic spirit and the will to forge friendships overcome the sorrow and consequences of war? A stadium in Kirkuk full of refugees actually existed. The picture took the New Currents Award and the FIPRESCI Prize at the 14th Busan IFF.

Shawkat Amin Korki (b. 1973, Zakho) hails from Iraqi Kurdistan, but until 1999 he was forced for political reasons to live in Iran. He has worked in theater, television, and film. He shot several short- and medium-length films, including Balloons Fly (Seode badkonakha, 1997), Trap Door (Daricheh, 1998), When It Rains (Dema baran bet, 2000), Passage (Bazgeh, 2002), and Threat (Gef, 2005). His feature-length debut came in 2006 with the road movie Crossing the Dust (Parinawa la ghobar – screened at Rotterdam); set in the aftermath of the war in Iraq, two Kurds try to find the parents of a lost boy with the unfortunate name of Saddam. 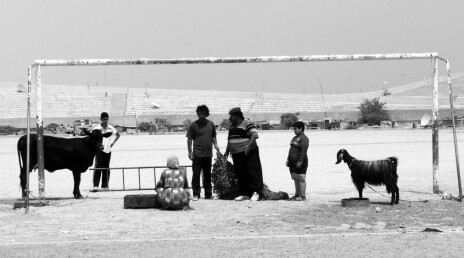