A twenty-minute documentary with dramatic elements which takes us to a seaside area of southern Albania, abandoned by the crowds of young people due to their social misery. This poetic film represents an effective cinematic rendering deep-selt pain over the disappearance of cultural values.

A coastal part of southern Albania is abandoned by crowds of young people due to the terrible social conditions. This poetic film represents an effective cinematic rendering of pain felt deeply over the disappearance of cultural values.

Eno Milkani (b. 1969) studied theatre direction in 1987-92. He stood behind the lens for the documentary Hic sunt leones and worked for Reuters. Albanian director Kujtim Cashku asked him to edit Eyes of Kosovo and Equinox. Since 1995 he has been producing for Bunker Film. The poetic documentary Abandoned Eden is his first shot at directing. 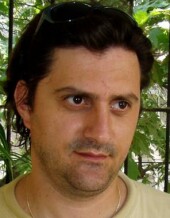