The well-known director’s latest film is loosely based on the suicide of Romantic poet Heinrich von Kleist, who plans to triumph over the inevitability of death through love, and thus desperately seeks out a kindred spirit who will die with him. Despite its extreme stylization and literary dialogues, the work nevertheless possesses a subdued and sophisticated humor as a leitmotif threading its way through the film.

Hausner – a well-known Austrian director with a distinctive directorial style – loosely based the script for her latest film on the suicide of the Romantic poet Heinrich von Kleist. In 19th-century Berlin, a young poet hopes to triumph over the inevitability of death through love, and thus desperately seeks out a kindred spirit who will die with him. To his chagrin and displeasure, he fails to convince his cousin Marie to be a part of his plans, and he is hurt by her insensitivity. Fortunately, he meets Henriette, a merchant’s wife who is beginning to suffer from an "illness of the soul” and perhaps more. For her exploration of love, Hausner has chosen extreme stylization and literary dialogue verging on the absurd. Although the story takes place in theatrically arranged interiors and the actors’ performances resemble declamations, like a leitmotif threading its way through the piece, its subdued and sophisticated humor aims straight for the hypocrisy and foolishness of the human race.

Jessica Hausner (b. 1972, Vienna) studied directing at the Vienna Film Academy (1991–94). Her short film Flora (1996) won an award at Locarno, followed by Inter-View (1999), which was awarded at Cannes. Her feature-length debut, the coming-of-age drama Lovely Rita (2001), was shown in the Un certain regard section at Cannes, which also screened her second film, the unconventional psychological thriller Hotel (2004). Several years later, she filmed Lourdes (2009), which was shown in competition at the Venice International Film Festival, where it won four awards, including the FIPRESCI Prize. All her films have played at Karlovy Vary; her latest film, Amour Fou, was screened as part of Un certain regard at this year’s festival in Cannes. 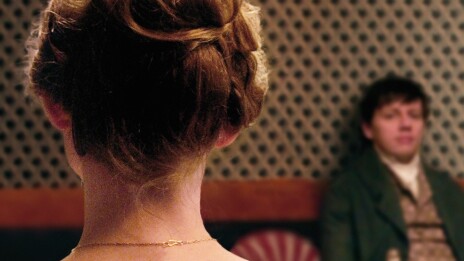