Cameraman Jason dreams of making a horror movie. Producer Bob promises to finance the project on one condition: Jason has 48 hours to find the perfect scream. The latest effort by the French director and musician innovatively combines various levels of fiction, different types of image, and the music of Philip Glass.

Cameraman Jason dreams of making a horror movie. Producer Bob promises to finance the project on one condition: Jason has 48 hours to find the perfect scream. Using L.A. once again as his backdrop, French director and musician Quentin Dupieux has come up with the complete opposite of his previous “dirty, mindless and simple” exploit Wrong Cops (2013). Reality is a “clean, smart and complex” film. It toys with various levels of fiction, blending dream with fantasy and shifting between film, life, and obscure reality-show fare. It measures the grandeur of 35mm film against the timeworn VHS and the stark perfection of digital. For his music score Dupieux dismantles various parts of Philip Glass’s Music with Changing Parts, combining them with the film image in a highly imaginative way. His surreally minimalist burlesque was screened to appreciative audiences at the festivals in Venice, Tokyo and Rotterdam.

Quentin Dupieux (b. 1974, Paris) released eight studio albums of electronic music under the pseudonym Mr. Oizo and created a number of remixes (Air, Squarepusher etc.). After several video clips he directed his first medium-length film, Nonfilm, in 2001. The feature-length Steak (2007) was screened in broader distribution both in France and abroad. His next film Rubber (2010), included in the Cannes IFF’s Critics’ Week, brought Dupieux to the attention of the international film set. Both his next two films, also made in the USA, Wrong (2012) and Wrong Cops (2013), were premiered at the Sundance festival. His music for Rubber and Wrong came out on separate LPs. 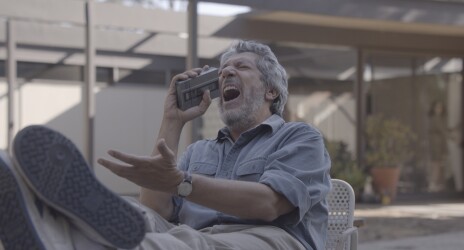