At the center of this renowned courtroom drama, which irked censors for the use of explicit words such as “rape” and “sperm,” is a small-town lawyer hired by an attractive young woman to defend her husband, a U.S. Army lieutenant, accused of shooting the local bar owner who allegedly raped and beat her. James Stewart, Ben Gazzara, and George C. Scott star in one of Preminger’s most famous pictures, the recipient of seven Oscar nominations.

This picture, the pinnacle of American courtroom dramas, is second only to Laura on the list of Preminger’s most famous films. It tells the tale of Paul Biegler, a small-town Michigan lawyer hired by young Mrs. Manion to defend her husband, an American army lieutenant accused of shooting the local bar owner who allegedly raped and beat her. The son of a prominent prosecutor and himself a graduate of law school, Preminger could hardly exclude the court system from his series of films displaying a fascination with American institutions. Screenwriter Wendell Mayes’ powerful script provided an outstanding springboard for Preminger’s subtle and exacting direction, excelling for both the story’s dramatic momentum and for characters that are intriguing and complex. The superb acting ensemble took their cue from the always unostentatiously charismatic James Stewart, and despite being little-known newcomers, Ben Gazzara, George C. Scott, and Lee Remick kept pace with him every step of the way. Nominated for Academy Awards in seven categories and hectored by the censors for the use of such explicit words as “rape,” “sperm,” and “panties,” the film is also associated with the curious casting choice of onetime U.S. Army special counsel Joseph N. Welch as the judge. In 1954 his iconic words addressed to Senator Joe McCarthy – “Have you no sense of decency, sir?” – helped initiate the end of a sad, witch-hunting chapter in American history. 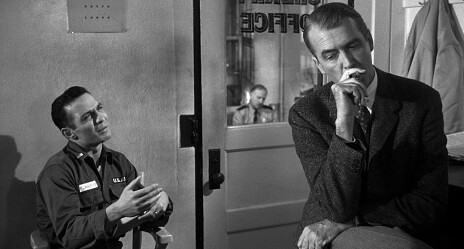