In the ruins of a house one afternoon, director Tsai Ming Liang meets Lee Kang Sheng, with whom he has shared his life for 20 years. The result is an original documentary shot in one take about an improvised meeting between two men who open up in front of the camera about their personal lives and about the back story behind long years of working together.

At a ruined house one afternoon, director Tsai Ming Liang meets with Lee Kang Sheng, with whom he has shared his life for 20 years and who is the closest person to him. The result is an improvised, unexpected, and elusory conversation between two men who open up before the camera about their personal lives, while also sharing the story behind their long years of cooperation. Despite the fact that Tsai himself is the director of the movie, he opts for candor, and from the very first sentence (when he confides that he feels he’s dying) he puts forward the greatest authenticity and maximum openness he is capable of expressing on camera. About the film he remarks, “All my works came about like accidents. Some asked what made me the kind of director I am. Honestly, I have no idea. When asked what I’m going to do next I have no answer to that either.” How is a cinematic work created? What goes on in the mind of an uncompromising artist? Where do they find inspiration and what is it like to share the same space with them? An original documentary shot in one take that attempts to provide the answers.

Tsai Ming Liang (b. 1957, Kuching, Malaysia) is a foremost representative of Taiwanese cinema. He made a name for himself with Rebels of the Neon God (Qing shao nian nuo zha, 1992), then cemented his reputation with Vive l’amour (Ai qing wan sui), which picked up the 1994 Golden Lion ex aequo at the Venice IFF. His 1996 picture The River (He liu) took a Silver Bear at the Berlinale, and he scored again at the same festival with The Wayward Cloud (Tian bian yi duo yun, 2005). In 2009 he was approached by the Louvre Museum to make Face (Visage), which competed at Cannes. His work is regularly presented at the world’s most prestigious festivals; KVIFF audiences have seen the majority of his motion pictures, with the director visiting Karlovy Vary in 2001. In 2013 Stray Dogs (Jiao you) was awarded the Grand Jury Prize at Venice. Journey to the West (Xi you) was presented at Berlin in 2014 and screened in the Imagina section at KVIFF 49. 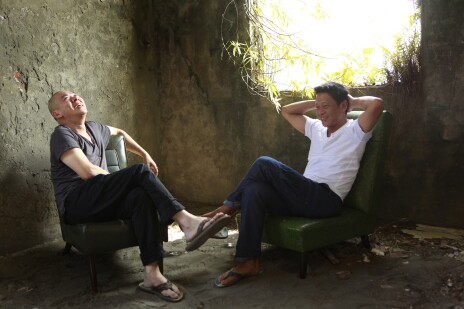