Archive of films Woman and the Glacier / Moteris ir Ledynas

This uncommon documentary portrait takes us to the Kazakh part of the Tian Shan mountains where a small glaciological station stands at the base of the Tuiuksu glacier, altitude 3,500 meters. Here, in a land of silence untroubled by historical events, lives a loner scientist who has dedicated her life to monitoring the climatic pulse of the planet.

This uncommon documentary portrait takes us to the Kazakh part of the Tian Shan mountains where a small glaciological station stands at the base of the Tuiuksu glacier, altitude 3,500 meters. Here, cut off from civilization, we meet a woman who has voluntarily cast herself into isolation for 30 long years in order to dedicate her life to monitoring the climatic pulse of the planet. The meditative quiet of the place being observed is shared by the Lithuanian documentarist’s signature directing style, in which individual shots become the vehicle for a gradual sense of stirring within the viewer. Whether we slip-slide through lofty stalagmite columns in deep caves, follow the slow-motion fall of rocks into a majestic valley, or enjoy the rollicking roughhousing of a dog and cat in the courtyard of the post-Soviet station, we can’t help but be deeply touched. Indeed, the images put before us have the magical power of being imbued with everything that the loner scientist has lived through in a land of silence untouched by the noise of historical events.

Audrius Stonys (b. 1966, Vilnius, Lithuania), director, producer, professor at the Lithuanian Academy of Music and Theater, and member of the European Film Academy and European Documentary Network, graduated in film and TV directing from the Vilnius State Conservatory. As an independent filmmaker he has shot more than ten documentaries that have received numerous awards at international festivals around the world, due in part to a characteristic writer-director style that partakes of a poetic documentary form. He took a European Film Academy Felix for European Documentary of the Year for Earth of the Blind (1992), and he is still the only Lithuanian to hold the award. The movies Flying over Blue Fields (1996), Harbor (1998), Fedia. Three Minutes after the Big Bang (2000), Alone (2001), Uku Ukai (2006), and I Walked Through Fire, You Were with Me (2010) screened at KVIFF. 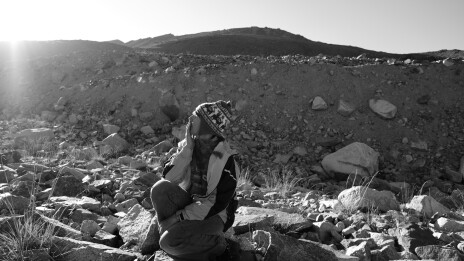