Top-flight competitive sports only recognise winners and losers. Nonetheless, does the decision to leave a world of constant grind automatically suggest capitulation? This intimate film depicts a young swimmer participating at the Olympic Games in what is the last competition of her career, yet what goes on around her becomes the backdrop for a much bigger battle.

Nadia, a 23-year-old swimmer, has some tough challenges ahead: not only is she going for gold at the Tokyo Olympics, competing alongside her three teammates, but she also has to accept the consequences of her decision to retire once the Games are over. Given that top-flight competitive sports only recognise winners and losers, does the choice to leave a world of constant grind automatically suggest capitulation? This subtle drama about suppressed emotions rather than performance itself is the second film by Pascal Plante, who entrusted the main roles to professional athletes. Plante drew on his own experiences as a competitive swimmer while submitting a vivid and authentic portrayal of his heroine’s inner world as she attempts to navigate the way ahead. 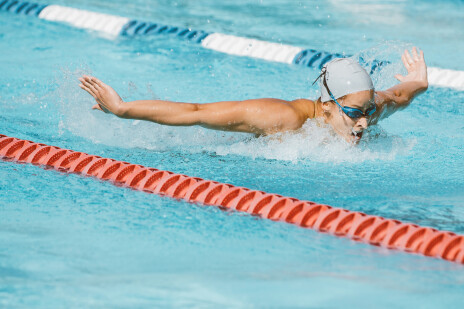