Charismatic logger Bob Tarasuk in his striking baseball cap will present himself to audiences in the international première of Bob and the Trees in the Grand Hall. The film inspired by his life by director Diego Ongaro is vying for the Crystal Globe at this year's festival.

Bob is facing problems on the timber market, which culminate with him making a not-so-wise business decision. Even so, this original workhorse who loves gangsta rap and golfing in snowdrifts attempts to find a solution to his own financial crisis. "I'm really a farmer and logger; the movie is a parallel to my life. I always wanted to earn my living doing something I enjoy and not just sitting somewhere shut up in an office," said actor Bob Tarasuk, describing his film prototype at the press conference with the filmmakers.

Bob and the Trees is based on a short film by director Diego Ongaro, who then plunged into a feature-length version. "Our thirty-minute project had great success at the festivals. The French co-producer approached me at one of them, asking whether I'd like to expand my film into a longer version. The fact that he supported me gave me a boost and we plunged into shooting," the director revealed at the conference. 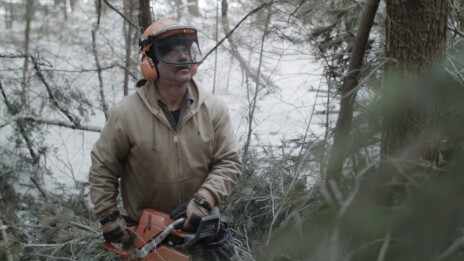