World-renowned artist Petr Sís is appearing at the Karlovy Vary International Film Festival not once but twice, this year. First in the installation Příběh (Story), which can be seen on the first floor of the Thermal hotel, in which he retells his life story in his own words. And then as the protagonist of the documentary Dreams About Stray Cats, filmed by his younger brother David.

“Our entire family works in film. Dad was a short film director and shortly after I was born, left to live in Tibet for three years. When I was about eleven, my parents left for Indonesia. They placed my sister in our aunt’s care and I spent a year in at a military sanatorium in Karlovy Vary. I wrote my parents letters from there and my father promised to bring me a surprise. I expected a pet monkey, but the big secret was that they were expecting another child,“ Petr Sís shared an anecdote about how he found out about his brother David.

Sís will not view the documentary his brother made about him until the festival premiere. “So you may be seeing me for the last time,” joked director David Sís. One of the people David invited to the opening was festival president Jiří Bartoška, which whom David is collaborating on a series of travelogues called On the Road for the Czech Television. “I’m glad that the world discovered Petr Sís for us and that we can help continue to discover him, here,“ said Bartoška 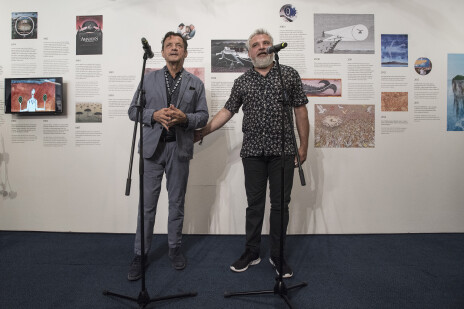