Before the premiere of her film My Sunny Maad, which won an award at the Festival of Animated films in Annecy, France and is being shown in the Special Screenings section at the KVIFF, Michaela Pavlátová welcomed the audience in the Grand Hall of the Hotel Thermal stating “This is the moment that we were all looking forward to. When we were preparing the film, we thought this moment would never come.”

Even though it has been in preparation for the last eight years and was based on an even older book by Petra Procházková, due to the recent events in Afghanistan the film seems unexpectedly topical. It tells the story of a Czech woman named Helena, who is moving with Nazir to Kabul, where she becomes part of a family she has never met. Thus, the director's main thanks also went to Kabul, "to the associates who do not have as many reasons to rejoice as we do. Our thoughts are with them,” stated the Head of the Department of Animated Film at FAMU, who has received numerous awards for her films, including an Academy Award nomination and a Golden Bear from Berlinale, greeting her colleagues from afar.

“The book and film are about the most fundamental human relationships, such as the love between a man and a woman and a woman for a child, so I think it is universal in time and space. At the same time, however, I hope that it will help us to be closer to the Afghan reality. That it will help people who are now seeing what is happening in Afghanistan to understand what is going on there now,” said Petra Procházková. 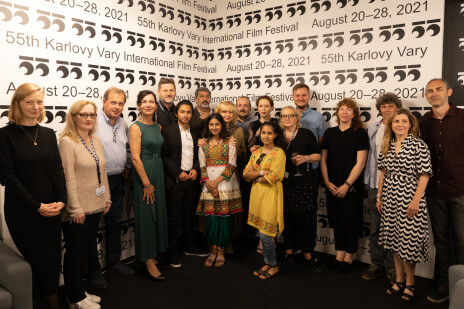