News Petr Sís watched a film about himself at KVIFF

Not only were the visitors to KVIFF intrigued about the world premiere of the documentary Dreams About Stray Cats, but so too was the protagonist of the film, Petr Sís. That is because he had not seen his younger brother’s film before now. But now he knows what his wife and publisher think of him.

He remains a bit of a mystery to himself. “Sometimes I don’t know why I do what I do, either. I just potter around with something and get into a harmonious mood. But I can’t explain these things,” the world-renowned artist reflected for the screening. “We asked ourselves how to make an interesting documentary about a person who just sits in a chair and draws. But we ultimately had too much material,” recounted David Sís.

The director also revealed that he is planning a film adaptation of his brother's book The Three Golden Keys. "I'll see you here in ten or fifteen years," he estimated. “The French already wanted to make a film about the book, but David Bowie was interested in the lead role and he mulled it over for too long,” Petr Sís recalled.

The brotherly documentary has been in production since 2017. When David Sís learned that Vít Olmer wanted to make an episode of the TV show GEN about his brother, he thought that he should make something about him himself. "We filmed for 168 days and spent over 200 more in the editing room, and then it took another year and a half to complete,” stated producer Vítek Bělohradský. 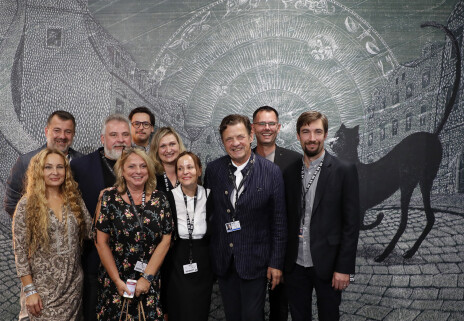